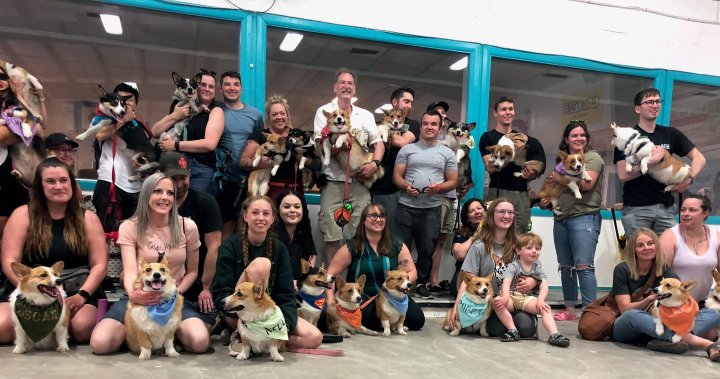 $3,000 Raised by Corgi Dog Races for the Saskatoon SPCA – Saskatoon

The Martensville Curling Club was filled with more than 35 corgis who feasted on Saturday.

“We love Corgis, we think they’re a really unique breed, and they’re becoming more and more trendy these days, so we just wanted people to come out and have a laugh,” said Kate Kading, Sask Corgi Racers. The group’s media liaison, the dog breed that’s garnering more attention than ever during the Queen’s Platinum Jubilee.

Kading says it was a way to raise money for the Saskatoon SPCA.

However, she didn’t expect to see more than 600 people in attendance.

“I was expecting around 50 to 100 people. It was actually overwhelming to see how many people showed up today to support this,” Kading said.

The competition had all different types of corgis, including pembroke welsh corgis, cardigan corgis, cowboy corgis and a lab corgi mix.

When event winner Stevie was asked how he was feeling, he said.

Stevie’s owner had expectations, so he was very proud of the result.

“Stevie dominated the competition at his first dog race in Saskatchewan, and it was very exhilarating and it’s clear that the strict training regime we put him through paid off this year, it was a tough camp, but she’s clearly been worth it,” said Kade, Stevie’s owner.

Another competitor, Hamilton, left his mark.

“I’ve wanted Corgi encounters in Saskatoon or the area for quite a long time, I’ve had these guys for 4-5 years, and you still see the encounters in other places, so the videos are great, and the people are always very good,” said Megan, Hamilton’s owner.

Maybe next year they can invite one of Queen Elizabeth’s corgis to be Grand Marshal.