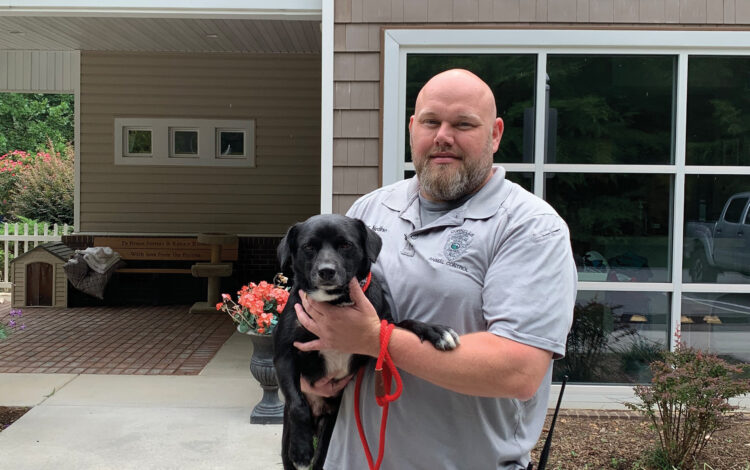 Animal shelter life is back to normal and busy, busy, busy

September 19. By TL Bernthal. Residents are once again showing lots of love at Cornelius Animal Shelter since the end of COVID-19 restrictions.

“We are back to what we were, busy all the time,” says Trey Nodine, animal control officer.

“There has been a great influx of interest since COVID.”

The animal shelter is open again on a regular schedule and volunteers are in place.

Volunteer activities were suspended during the pandemic, but now volunteers are “back in full swing”, he says. There are 15 volunteer applications pending.

As of mid-August, the shelter had seven dogs up for adoption and 19 cats.

‘We have been busy with the arrival of cats’, including the surrender of two older Siamese cats which the owner did not make arrangements for before passing. Family members with no plan for pets when the owner dies are responsible for many abandonments, Nodine says.

And from spring to summer, there are many litters of kittens.

“People say they feed the neighborhood cat but don’t ‘own’ it, so they don’t know what to do when the cat has a litter,” says Nodine.

The shelter sometimes reaches its capacity of 36 cats, but usually not with dogs, says Nodine. Fewer dogs than cats come to the shelter, and the limit for dogs is 19. There is some wiggle room on capacity if the animals are young.

The average stay at the shelter in 2021 was 25 days for dogs and 83 days for cats. Last year, the average for cats was higher than usual because some older cats were taking longer to find homes, Nodine says.

For the first time, the city shelter is seeing a trend of Cornelius residents handing over animals adopted during the pandemic by Charlotte Mecklenburg Animal Services, Nodine says.

Charlotte Mecklenburg will not take back animals they have adopted, Nodine says, which he understands because of the volume of animals they serve.

Many shelters and rescues are overwhelmed by the number of pets adopted during the pandemic who are being sent back because families can no longer care for them as inflation rises and worries about the economy persist.

Cornelius Animal Shelter hasn’t had this problem, mostly because pet abandonments are only done by city residents, a smaller group of pet owners than what other shelters serve. and rescues.

There are no official plans to expand the Cornelius facility, although Nodine says the need exists.

He is grateful that the city approved the addition of a garage and small storage rooms which were recently completed.

The garage allows the animal control truck to pull and unload an animal, which is a much safer process than passing animals through the hall, Nodine says.

This summer has seen the return of individuals and groups dropping off donations, so the supply of towels and food is at a good level.

“Of course, once I say that, something will happen and we will need more,” Nodine says with a laugh. “We go through a lot of towels and supplies.”

Nodine, the town’s animal control officer for 12 years, is one of two full-time officers. Longtime officer Kenny Russell is the other. They are joined by a part-time agent for 18 to 20 hours per week.

The part-time position allows the shelter to be open to the public on a regular schedule as well as accommodate after-hours or weekend appointments to see adoptable dogs and cats.

“The more available we are, the more likely it is to move an animal to a home,” says Nodine.

Most of the dogs that come in are large breeds, usually 50 pounds. and more, says Nodine.

“There are a lot of mixes of pits and pits and labs. Real labs, not pit bulls, some say they are labs,” says Nodine. “But really all kinds of races.”

Cats run the gamut from rag dolls, Siamese to tabbies and everything in between, he says.

Animal Control Officers are responsible for managing the Cornelius Animal Shelter and responding to all animal-related service calls within the city limits.

The majority of calls for animal control are about bites from dogs and cats, says Nodine. Almost all of them are not serious, but those where someone got caught trying to cut an animal’s nails or during play.

Physicians treating bites are required to report incidents to the city and county.

Animals that have bitten someone should be quarantined either at animal control or at home.

Dogs are allowed outside in the outdoor enclosures, weather permitting, to defecate and play.

Most animals that come to the shelter are dogs and cats, although the shelter has hosted rabbits, birds, iguanas and a ball python.

The only pets the Cornelius Animal Sanctuary will accept are owner-abandoners of city residents or strays found within city limits. The redemption fee is $40.

Take care of ours

Charlotte Mecklenburg Animal Control provides services for the county, but Cornelius Animal Shelter tries to care for its own and will therefore keep animals until adopted. The county charges $40 for any animal the city brings into the county and $400 for any service it provides, such as picking up a stray animal at night.

Those charges could add up quickly, Nodine says, which is why he’s grateful that other Cornelius Police Department officers are good at bringing in strays when the shelter is closed and staff are away. In the animal shelter building, there is a designated area for animal control. Animal control has its own kennels where a patrol officer can put a stray animal until shelter staff arrive in the morning, Nodine said.

The first step is to complete an application for a specific animal. Applications are available on the city’s website or at the shelter.

Adoptions are never done on the same day, says Nodine.

Animals brought in are examined for their temperament and given veterinary services including injections, neutering and microchipping before they are available to leave with their families forever, Nodine says.

A Buddies for a Day program is being considered by city officials and Nodine hopes it will be approved soon.

It would allow someone to take a dog out of the shelter for a day so the dog could go for a drive, play in the park, get individual attention.

Less likely is a home program. The animal shelter did this early on, before Nodine’s stay there, but it didn’t work because the pets weren’t always available when potential adopters wanted to see them.

• Monetary donations can be made online or in person at the shelter. Donations go into a designated fund used for maintenance or unforeseen needs.

• If you would like to volunteer, submit an application. Volunteers walk the dogs, play with the cats, do administrative work and help clean the shelter.

The FY23 budget for Animal Control is $248,692, according to Police Chief Kevin Black. Staff costs for salary, over time, benefits that are budgeted for animal control staff in FY23 are $197,208, he said.

Additionally, there are necessary operating costs for animal care and running the unit. In FY23, the department has a budget of $51,484 for lodging operations, Black said.

A Breakdown of Joint Pain in Dogs