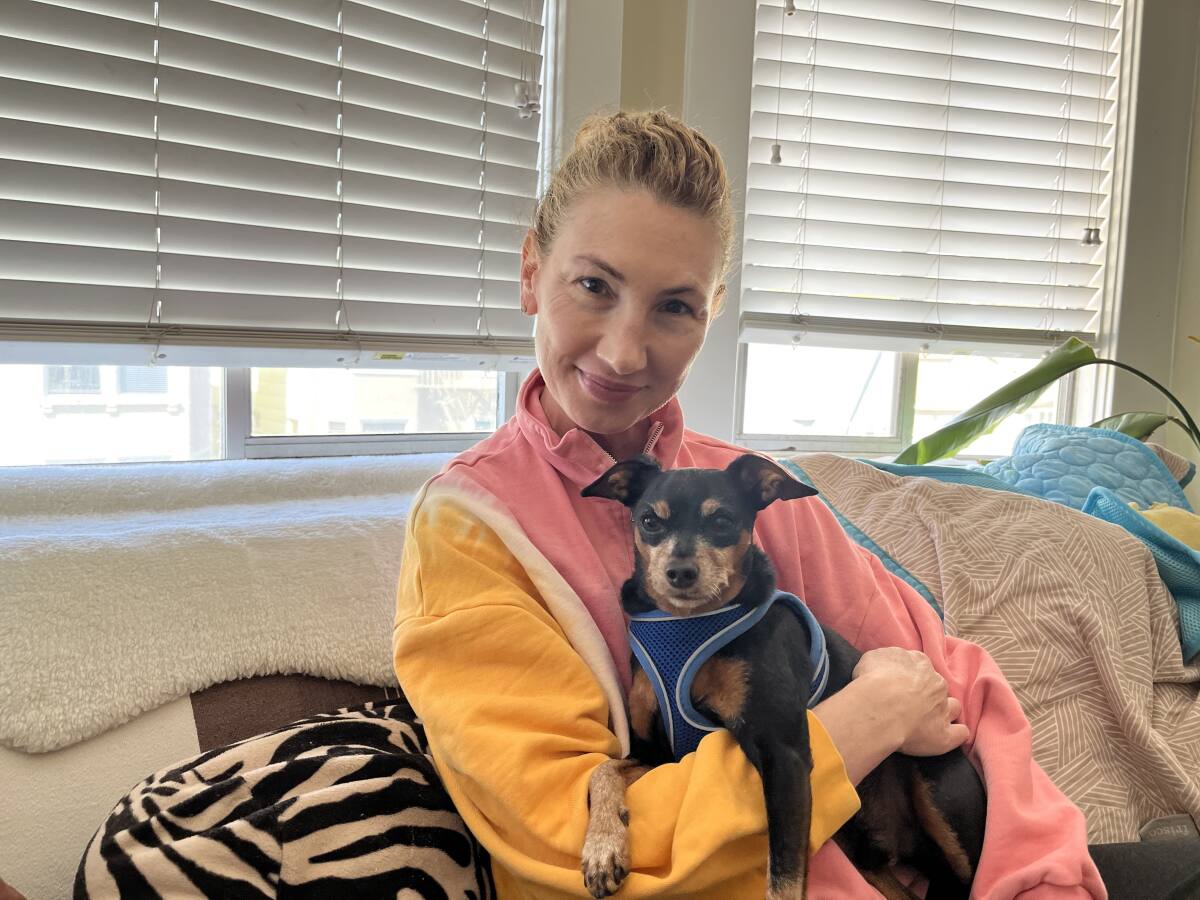 When Kerri Finn lost her 16-year-old miniature pinscher, Roman, in September 2020, she promised him she would learn to love again.

She joined a massive group of 23 million American households who adopted a pet during the pandemic, the American Society for the Prevention of Cruelty to Animals reported. But deep down, she knew the day would come when she would be asked to return to the office.

“I just wanted to be prepared,” she said over the phone, yelling, “Forget it,” as Jimmy barked at something outside. “Hold on. I’m going to give him a treat.

Before having to report to the office three days a week from last March, she set up surveillance cameras and left the house for hours to see how Jimmy would do without her.

“It was a disaster,” she said.

Finn, 53, recalled how Jimmy suddenly started peeing around the house, jumping around and panting as he paced.

She later learned from an animal trainer that Jimmy suffered from separation anxiety, which is a stress reaction “that a dog exhibits when the person (or people) the dog is related to is far from home,” reports PetMD.com.

Finn reached out for help and soon discovered she wasn’t alone.

The phones are ringing nonstop at daycares and dog training centers in North Bay, as well as independent trainers in Marin, Sonoma and Napa counties.

“It took me a while to find a coach,” Finn said.

The first time they met, Pearson insisted that Finn take Jimmy outside to where she was standing by his vehicle on neutral ground away from the house. This way, Jimmy would refrain from trying to protect Finn on their territory.

For each visit, Jimmy progressed in “zoopharmacognosy,” a behavior in which animals self-medicate by ingesting plants to reduce toxins. Dogs with problems demonstrate their need for training by showing symptoms of erratic behavior such as barking incessantly, licking their paws, running and barking, Pearson said.

Since then, Jimmy has calmed down considerably, Finn said.

“Marji has so much passion. We started with once a week at first. With a rescue dog, you need to establish that trust. Now it’s once a month — maintenance,” Finn said.

The profession of animal caretaker

Armed with a master’s degree in psychology, Pearson comes across as “a dog whisperer,” but she’s worked for more than six years with an assortment of animals. This includes cats, horses, donkeys, goats, turkeys and dogs. Like other coaches and centers, she is busier than ever.

The relationship begins with a free half-hour consultation. Then two sessions totaling up to five hours that cost $650. Although she declined to provide financial information about her private company, Pearson says her business has doubled this year compared to 2019 (with 2020 being a down year she called “non-existent”). The outlook continues to grow. She receives an average of about 30 calls a month from pet owners who need help.

“During the pandemic, a lot of people picked up animals that were already in trouble anyway. All they knew 24/7 was their family, no visitors,” she said.

Cynthia Rinehart, owner of Pets R Family 2 in Napa, refers to animals rescued during the pandemic as “COVID puppies,” adding that even with employees working from home, at least they were around their pets. Zoom meetings have made pet photo-bombs a regular practice during the pandemic. Some posed on nearby laptops, chairs or sofas. Others were scratching at the door. Many barked. But the behavior broke the monotony of the working office atmosphere.

But what happens when pet owners cut the cord and return to the office?

“It’s tough. The big concern is that the animal is used to being there all day,” Rinehart said.

“What we are seeing is unprecedented in the number of dogs brought into families. A flood of people had puppies. On top of that, they cater to people who may know nothing about dogs and just want a friend and companion,” Gray-Nelson said.