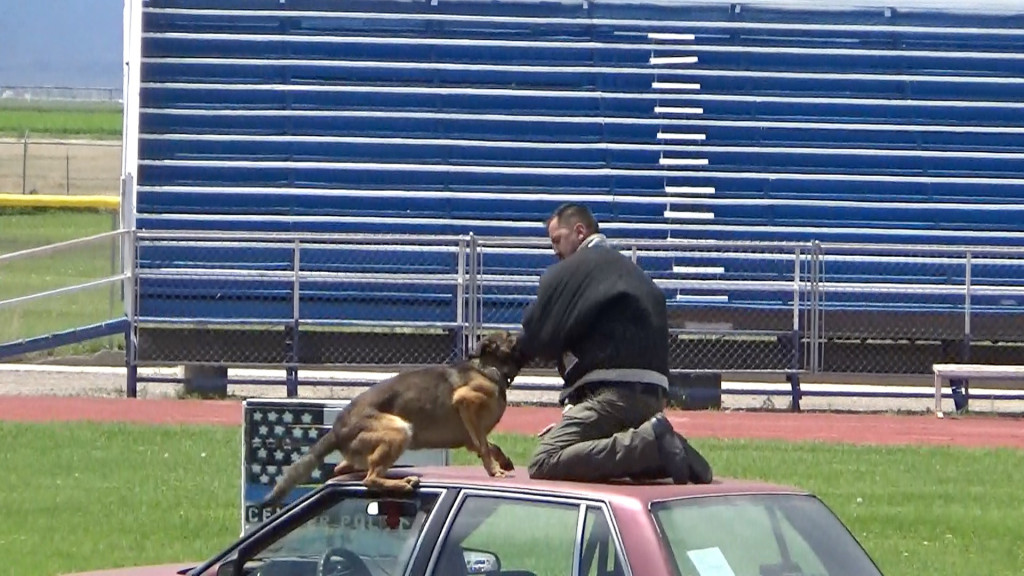 CENTER – The Center Police Department held its second annual K9 competition at Center Community Park on July 23, a demonstration of canine law enforcement skills and agility. Attendees learned details about the K9 unit at the center, an overview of the training program, and first-hand experience of being taken down by a K9 officer.

CPD Acting Police Chief Aaron Fresquez shared the microphone with his identical twin brother Adam, another officer in the department (along with his sister AJ Fresquez). They took turns demonstrating drug identification and suspect apprehension while describing the training process and support within the Center’s community.

“Kitt has been on the force for two years,” explained Adam Fresquez as his brother took him through the course. “It’s a dual-purpose German Shepherd and Dutch Shepherd cross.”

“Dual-purpose” means that Kitt can detect illegal narcotics and, if necessary, pursue and apprehend a suspect.

Fresquez described the partnership between the Central Police Department and the Consolidated Central School District. They plan to place one of the K9 agents on campus as a different school resource agent.

“We were able to get this school program paid for by the schools in the center,” Fresquez said. “They’re going to pay our full-time officer, and we’ll pay the benefits. We have an officer in the school all the time. The dog at the school will be trained in explosives, bullet residue and firearms.

Representing the Salida Police Department, a Dutch Shepherd named Sarge correctly identified the hidden drugs and completed the obstacle course. Although the Central Police Department’s K9 unit currently consists of three dogs and has previously trained and sold other K9 officers, Salida’s Sarge is the only dog ​​in the force.

Despite other activities planned across the Valley, enthusiasts, young and old, came to the stadium to see the dogs in action and learn more about the program.

T-shirts and food for sale raised funds for the department.