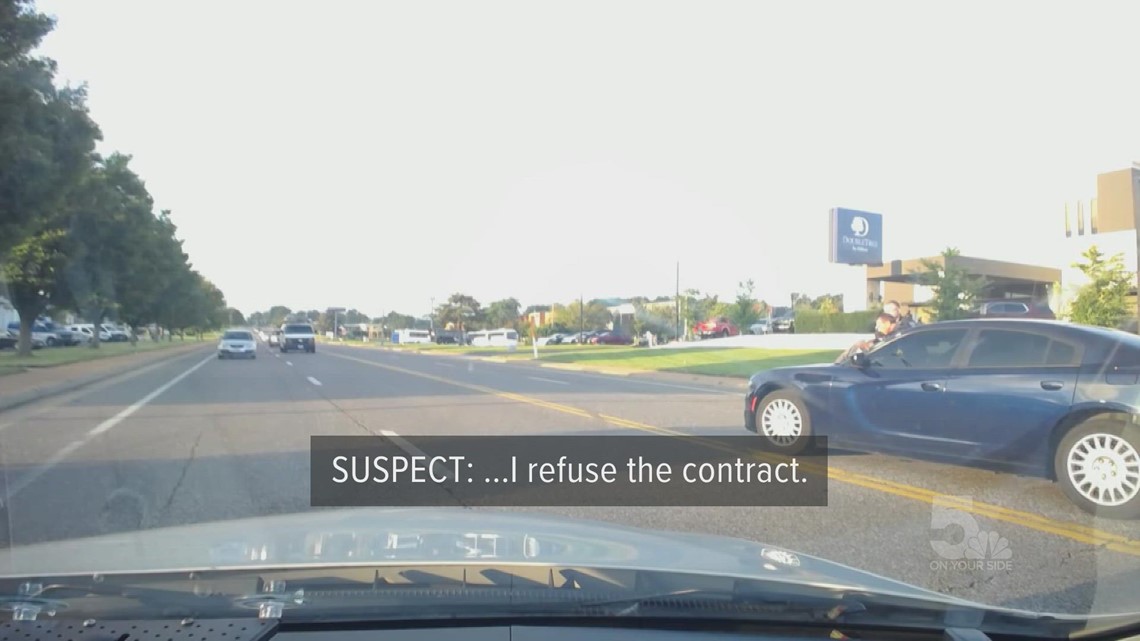 “Dude, you’re going to get eaten by this… dog if you don’t relax,” an officer says to the man as they hold him to the hood of the car.

5 On Your Side obtained this video through a Freedom Of Information Act request. According to the town of Woodson Terrace, the video is from the car of a Breckinridge Hills officer assisting at the stop.

A video recorded by a passerby first brought the case to public attention last week. It shows a police dog biting a suspect held against a police car.

The suspect, who 5 On Your Side does not name at this time because he has not been charged, tells the police “I refuse” and “I refuse your contract” when the police give him orders.

Woodson Terrace said the man claimed to be a “sovereign citizen” who did not recognize his authority. Police said officers had been called to the area over a man suspected of trespassing and threatening to “kill an employee of a hotel” nearby, spokesman John Hancock said on behalf of the city.

Police also said the man threatened to kill police officers, but this cannot be heard on the dashcam video.

The police eventually pinned the man against a police car, but he refused multiple police orders to put his hands behind his back.

While two policemen hold the man against the car, another walks away and returns with a police dog.

“He’s going to get chewed,” one officer can be heard saying to the other while waiting for the officer to return with the dog. “I know,” replies the third officer.

“Dude, you’re gonna get eaten by this … dog if you don’t relax,” an officer says to the man as they hold him to the hood of the car.

When the officer with the dog returns, he again orders the man to put his hands behind his back and the man again says, “I refuse.”

After the exchange is repeated at least three times, the officer with the dog orders the dog to attack.

“Bite him, Mika,” the officer is heard saying. Mika, says Hancock, is the name of the dog.

“Go to the ground,” officers can be heard yelling at the man as the dog clings to his lower body. “I refuse,” the man continues to shout.

“Bite it… Mika, bite it,” the officer repeats.

Finally, the police handcuff the man.

Hancock said all of this was done in accordance with departmental policy.

First, he said, the police considered using a Taser on the man, but decided not to because his clothes were too thick for the teeth of a gas discharge device. electric can enter it.

Hancock said Woodson Terrace Police policy is that if a Taser isn’t an option or doesn’t work, the police dog is what officers are trained to do next.

Whether that means it’s legal remains to be seen.

Last week, 5 On Your Side showed cellphone video to a police dog expert Michel gould, who said they found the video “problematic”.

Gould is an expert witness specializing in forensic handling of dogs, canine police tactics, dog bites, deployment of police dogs, use of force, canine crime scenes, use of dogs narcotics and olfactory recognition.

“The use of a police dog is an instrument that must be deployed with a lot of caution,” he said last week, “and there are certain circumstances, when it comes to probable cause, what the underlying crime was and sometimes the police incidents escalate, but sometimes they fall apart. In the video I saw, it seemed like the detained person was under control. “

Currently, the St. Louis County District Attorney and the FBI are both investigating this arrest.

The Woodson Terrace police chief previously said in a statement that his department would cooperate with the investigations.

Disclaimer: Some viewers may find the videos disturbing.