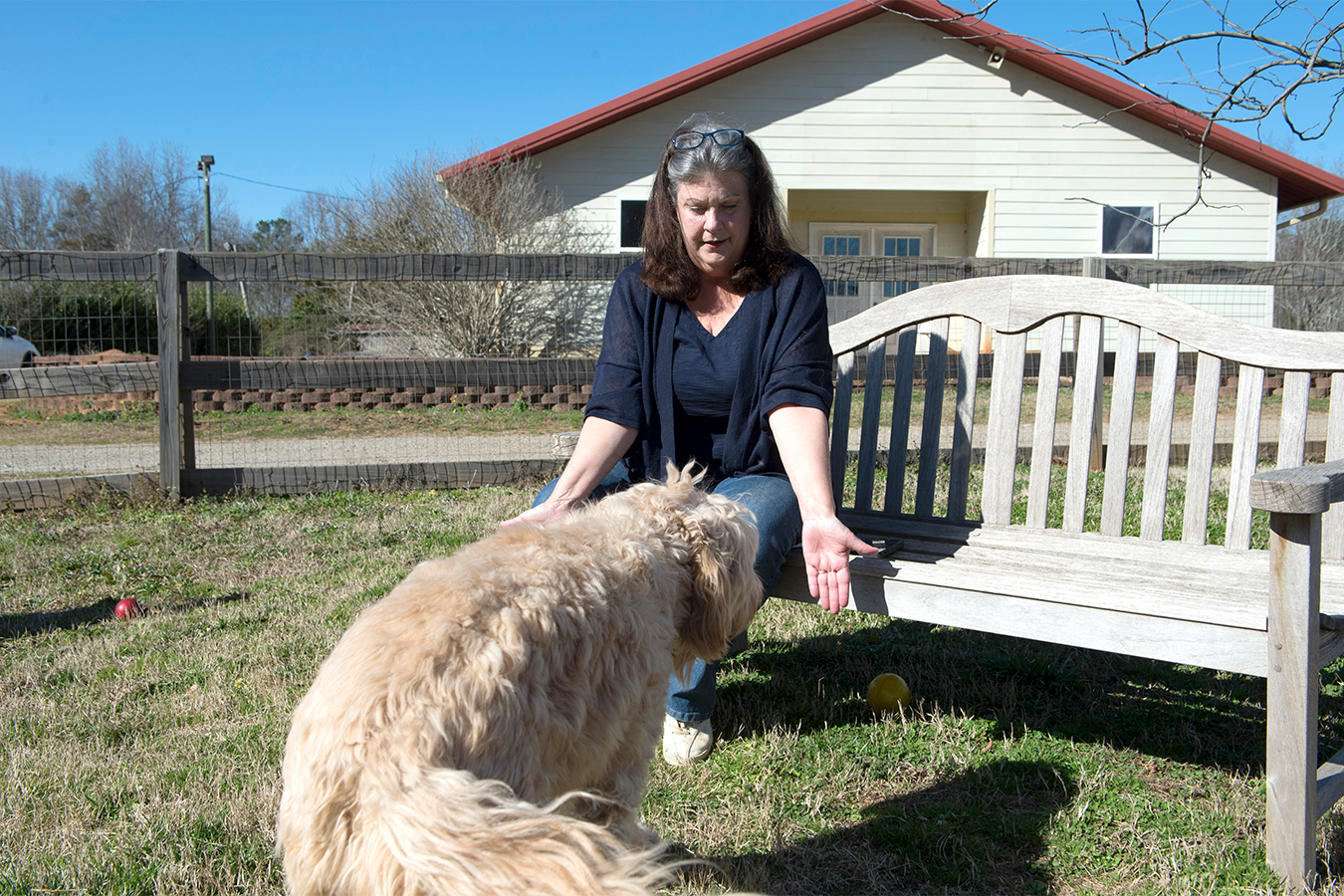 Demand for service dogs frees up a ‘Wild West’ market

Jenni Mahnaz admits she doesn’t like dogs very much. She is mildly allergic and the only pet she had as a child was a hermit crab. But once she learned that specially trained dogs could help her daughters meet their medical needs, she was willing to do anything to make it happen.

Her eldest daughter, Suraiya, 6, has been diagnosed with autism and sensory processing issues. Shortly after, 4-year-old Phoenix was diagnosed with epilepsy.

“Our family is very likely to end up with two service dogs,” Mahnaz said. “I think we’re probably looking at $10,000 per dog.”

This is a serious obstacle for the family of five from Troy, New York, whose income is below the federal poverty level, even though they will save money by buying puppies from a breeder and then paying a local trainer to train them as service dogs.

Organizations charge between $15,000 and $40,000 for a fully trained service dog, which they have raised, raised and trained for a year and a half. None of these costs are covered by health insurance. Other trainers have long waiting lists or don’t place dogs with young children.

“It’s very expensive for us, but I’m the parent of my daughters, and it’s my job to do everything I can to make their standard of living as good as possible,” Mahnaz said. “It’s a need for them and it will make a big difference in their lives.”

Demand for assistance dogs has exploded in recent years as dogs have proven adept at assisting children and adults with an increasing number of disabilities. While dogs once primarily served people with vision or mobility impairments, they now help people with autism, diabetes, seizures, and psychiatric disorders. This has overwhelmed nonprofit service dog trainers, who typically donate dogs to patients for at most a nominal fee. But the unmet needs helped launch a for-profit service dog industry with steep price tags.

However, the rapid growth has come with little oversight, potentially subjecting people with complex medical conditions to huge financial hurdles, poorly trained dogs, and outright fraud. These pitfalls are only exacerbated by social media, including fundraising sites like GoFundMe that allow families to reach price thresholds they could not afford on their own. The booming market encourages trainers to charge more for their services, confident that the funds will be returned.

Some, like the Mahnaz family, gamble by training their own dogs to cut costs. But trainers say the success rate of self-trained dogs is lower than theirs — and families could lose thousands of dollars.

“The dog could absolutely fail. We could end up with an adult dog that can’t be a service animal,” Mahnaz said. “The reality is that we have no choice.”

The lack of regulation for service dog trainers has opened the door to dozens of backyard trainers who may or may not be qualified to train service dogs, said Lynette Hart, a professor of veterinary medicine. at the University of California-Davis. There is also no certification process for assistance dogs.

“There’s a big opportunity for dog trainers to say, ‘Oh, I’m going to sell you one for tens of thousands of dollars,'” she said. West.”

But it also leaves families susceptible to burnout with little recourse.

“Sometimes they’re sold a bill,” said Sheila O’Brien, chair of the North American board of Assistance Dogs International. The group accredits service dog trainers, but accreditation is voluntary and only nonprofit organizations are eligible. The group has 80 accredited members and 25 candidate programs in North America. But no one knows how many unlicensed dog trainers operate in the United States.

“It’s so easy to scam people on the internet. There’s a lot of money to be made here,” said David Favre, a Michigan State University law professor who specializes in animal law. “It was never controlled, and it got worse.”

In 2018, for example, the Virginia attorney general filed a lawsuit alleging that a company named Service Dogs by Warren Retrievers charged families up to $27,000 per dog, but often delivered “poorly trained puppies with significant behavior problems and inadequate skills or training”. The coach settled the lawsuit last year for $3 million.

In 2020, the North Carolina Attorney General filed a similar lawsuit against the owner of Ry-Con, a nonprofit service dog trainer. The lawsuit alleged that Ry-Con charged families up to $16,710 per dog despite knowing the dogs were not properly trained.

Both training companies have now gone out of business and the former owners could not be reached for comment.

O’Brien estimates that the average cost of training in the United States is $30,000 per dog. But trainers also have to factor in the costs of the 60% of dogs that won’t pass the training.

Sometimes dogs bathe because of health or temperament issues. “Some are just lovers and not workers,” O’Brien said.

Jennifer Arnold, founder of Canine Assistants, a nonprofit training organization in Milton, Georgia, said there’s a lot of work left after a dog graduates, but many for-profit trainers end their involvement when they sell the dog. Many people need help with issues such as burglaries or difficulty walking on a leash.

“Clients can have dogs that aren’t prepared, and sometimes when dogs are prepared, they end up with families that don’t follow through,” Arnold said. “It’s hard on both sides, but the families benefit a lot more than the other way around.”

Canine Assistants has the capacity to train and place a maximum of 100 dogs per year, but receives approximately 1,400 applications.

“The need is immense,” Arnold said. “It’s made the industry perfect for people who want to make a bit of money.”

In most cases, this money does not come directly out of patients’ pockets.

Kelly Camm, director of development for the Xenia, Ohio-based nonprofit 4 Paws for Ability, said only about 5% of families can write the $17,000 check required for a service dog. Others rely on their community, family, friends or sometimes complete strangers for donations.

Medical Mutts Service Dogs in Indianapolis trains about 30 service dogs a year, about a third of which are dogs that board with them for training.

“There is no guarantee that any of these dogs will pass,” said Eva Rudisile, director of customer services at Medical Mutts. “As you start training and taking them out in public places, you start practicing certain behaviors, it’s quite stressful. And some dogs, they just can’t handle that.

Medical Mutts charges $15,000 to $17,000 for a program dog depending on the type of disability involved. It’s $11,000 to house and train a dog. If that dog washes up, the family loses that money. Families who opt for a program dog, on the other hand, are guaranteed to have a dog that completes the training.

“That’s the biggest advantage for a program dog,” Rudisile said. “They don’t have the risk of saying ‘OK, I have a dog and now I’m stuck with it and it’s not working.'”

For the Mahnaz family, it’s a bet worth taking. A friend set up a GoFundMe page to raise the initial $4,000 to get his first dog, a goldendoodle, from a breeder. They will start with basic obedience training and, when the dog is old enough, begin their service dog training.

They hope an autism service dog will help Suraiya cope with uncomfortable social situations and calm down when she’s on the verge of a breakdown. Eventually, they will get a second trained dog to alert them when Phoenix is ​​having a seizure.

Suraiya, who can’t write yet, nevertheless created a list of potential dog names that only she can read: Blueberry, Alex, Stardust, Jelly-Jam. Phoenix opted for Pancake.