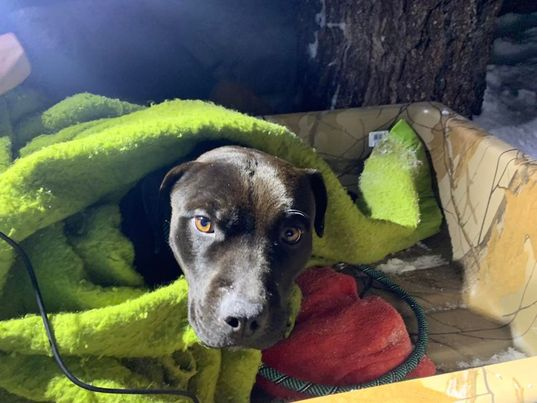 SOUTH LAKE TAHOE, Calif .– Russ is a lucky dog â€‹â€‹and he has to thank a team of animal lovers and rescue experts in South Lake Tahoe.

In August, Russ was in South Lake Tahoe with his owner who was in town on temporary work when the three-year-old pit bull mix disappeared. A lost dog report was made and handed to Animal Control, but the whole town was evacuated within two days due to the Caldor fire and Russ’s human had to leave without him. He returned home to Riverside County thinking he would never see Russ again.

Before and after the city’s repopulation, reports were posted on Facebook of a black dog with white chest markings appearing on their porches and yards or spotted in neighborhoods around Gardner Mountain.

Over time, Russ’s human told himself that he would never see his pet again.

Fast forward to December 16, when Christian Holland, an Azul Latin Kitchen employee, was with a friend snowboarding and skiing between Twin Peaks and F Street in South Lake Tahoe. They saw a black dog in a tree well in the snow, unable to move. The dog growled at them and they could not retrieve it. Christian took the photos and posted them on a lost and found animal page on Facebook where Wendy Jones, founder of Tahoe PAWS and TLC 4 Furry Friends, saw them. Her group is professionally trained to search for missing pets, and she travels the Sierra and western Nevada to reunite humans with their beloved pets.

El Dorado County Animal Control Officer Kyle Shumaker was notified and proceeded to F Street but was unable to access the area due to deep snow from five feet and steep terrain as he had no equipment with him.

Wendy was on another missing pet case and called Leona Allen, a member of her team, to try and save the dog.

Leona received the photos taken by Christian and a map of where he and his friend had been. She and Elsa dressed in snow clothes and made their way to F Street. It was already dark and the temperatures were approaching zero degrees. They found the snowboard and ski tracks of the two men who had seen the dog and went straight up the hill where Leona found the dog tracks.

“I saw a black spot in the snow, thinking the dog was dead,” Leona said after climbing the hill in the snow for a mile.

As she moved closer and the dog moved, Leona said it was “the happiest moment I have ever had”.

Elsa retrieved an ice rescue sled from Officer Shumaker and headed for Leona.

Leona calls Elsa the “dog whisperer” and she was able to immediately calm the dog down and gave him treats, salami, and a warm down coat. As she stroked him, the dog put her head in Elsa’s hand and they sat together for about 30 minutes.

Seeing that the dog couldn’t get out on his own, they put him on a sled, but when the dog jumped, Leona sat in the sled with him and bundled him up. Elsa pulled the two down the hill on the sled. The sled tipped over and Elsa carried the dog the rest of the way.

There was a lot of laughter involved in the rescue, a sound that Leona and Elsa saw immediately calmed the dog.

â€œIt wasn’t a smooth race,â€ the ladies said as they methodically descended the steep hill in the dark.

Agent Shumaker immediately took the dog (still in Elsa’s down coat) to a vet for examination and Leona and Elsa had to go upstairs to retrieve some items left upstairs.

â€œI’m super happy it turned out the way it did,â€ said Leona. â€œHe wouldn’t have spent the night.

The next day, Leona went to the rescued dog at the animal shelter and he didn’t want to leave her, a bond had formed. With the help of EDC Animal Services, volunteers from TLC 4 Furry Friends & Tahoe PAWS visited Russ daily to remind him that he was loved until he could return home.

Animal Control checked to see if the dog had a microchip and found one, but discovered that it was not registered. They saw that it was once in Riverside County, so they called all the vets in the county, trying to locate the owner of the dog they found. They then found the old August “lost dog” report and called the dog’s owner. He had not paid to renew the microchip because he thought his dog was gone forever.

Animal Control took the dog they then knew to be “Russ” to Placerville due to the impending storm, and the dog’s owner was able to pick him up there on December 26, four months after their separation.

This is a great reminder that it is important to microchip your pet and maintain your name registration. It is also essential that you report your pet to the local animal services office if they go missing.

Leona has been involved in PAWS as a tracker since December 2019. She has been involved in 10 dog rescues and eight cat rescues where significant action was needed (tracking, cameras, traps, overnight stays in the woods, etc.). Nine of his 10 dog rescues were successful, and five of the eight cats were. One of the cat rescues required overnight stays over Emerald Bay in the snow. She attended about twenty others.

Virus sniffer dogs deployed in the fight against COVID-19