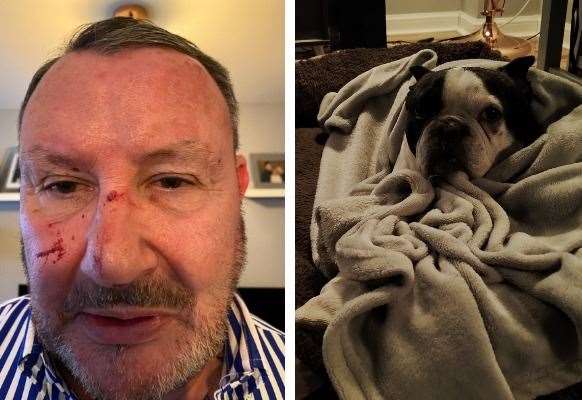 A man who suffered cuts as he had to intervene after his French bulldog was attacked by another dog fears a child is next.

Stephen Woollard, of Petunia Avenue, Minster, Sheppey, was walking his beloved pup, Louis, when a large pit bull-type dog ran towards them from an open front door.

The dog lunged at nine-year-old Louis, biting his chest twice.

Mr Woollard said he had no choice but to free his pet, only for him to attack again, this time sinking his teeth into his dog’s neck.

He described it as “like fighting with Arnold Schwarzenegger”.

“I had to throw myself at the dog and try to knock him to the ground,” the 59-year-old added.

“He wouldn’t let go and I thought he was going to maim little Louis to death.”

Mr Woollard, who is retired, was walking along Cornflower Way, Minster, on March 1 when the dog, who had no collar, sped across the road.

After the attack, he immediately took Louis to a vet to treat his injuries, which could have been much worse without his harness.

He continued: “We called the police and the Swale council dog keeper. The dog keeper said they couldn’t do anything upsetting to hear as the experience was terrifying.

“A dog attack is always one of those things you only see happen to someone else, I never thought it would happen to us.

“Just down the road from the attacking dog’s house is a playgroup. It scares me to think it could and probably will happen again, but maybe with a small child.”

Mr Woollard, who was also injured, suffering cuts to his face and ear, explained he did not want the dog to be put down, but wanted the owner to take some responsibility for it that had happened.

He said: “I tried to see the logical side of what happened, but the dog literally came out of nowhere. There was no buildup, it just happened.

“He’s owned by a young man and they probably love that dog as much as I love Louis.

“He told the police he wanted to contact me to say ‘sorry’ but there was no offer to pay the vet bills.”

Louis, who needed £146 of treatment, is now on the mend physically but mentally is suffering from trauma.

Mr Woollard said he was told the man was unable to contribute even a small amount of money to Louis’ care as he had no job and would have to ask him for money to Mom.

He continued: “We were heartbroken. I could have lost my tiny little dog that day, but the owner has no responsibility – he just wants to say ‘sorry’ on the phone.

“My dog ​​is my baby. If he was my child, I would have done the same, and if I hadn’t, Louis might not be here with us today.

“The vet said I was very brave and if I hadn’t intervened Louis would have died without a doubt.”

Mr Woollard has had Louis since he was a puppy and said he was a very placid and affectionate little dog.

A spokesman for Swale Council confirmed that Mr Woollard reported the dog attack.

They added: “We have advised him to report the incident to the police who deal with any suspected prohibited breeds.”

When KentOnline asked police for comment, a spokesperson said the investigator had been contacted for further details.

Meanwhile, Mr Woollard has warned there could be a repeat attack.

“Something has to be done because it will happen again,” he said.

“If the dog was a prohibited breed, the police should have acted immediately.”

“The lack of help from the police is the source of our pain.

“If the dog was a prohibited breed, the police should have acted immediately.

“On top of that the police work with the keeper of the dogs in Swale so they should have contacted the keeper and spoken to them and said if it was a prohibited breed or not so the keeper could get to the address and investigate the matter.

How to keep your dog’s mind in good shape