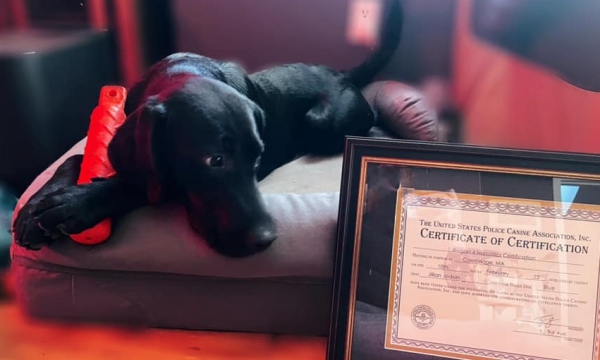 They met over 20 K9 teams from all over Massachusetts and New Hampshire with one goal in mind, PASS. Despite Blue’s young age and Officer Jodoin’s short time as a dog handler, they have been certified! They officially surpassed the state standard for working dogs and police dog handlers.

Despite the popular rumor that Officer Jodoin and K9 Blue are the first K9 team in Fairhaven, Officer Richard Kendall had the first police dog in 1980-1981. The department headed by Chief Peter Barcellos acquired the dog to help with the Fishermen’s Riots that were unfolding across New Bedford and Fairhaven. K9 Caesar served as a deterrent and peacekeeper at Union Wharf, where fishermen gathered daily to protest. K9 Caesar was eventually used by the Marion Police Department and later by the Wareham Police Department, where he served the rest of his career.

Officer Kendall and K9 Caesar have also been certified by the USPCA (Police Dog 1). Its certification is proudly hung in our resort. We are honored to maintain the finest tradition in our history and exceed the norm.