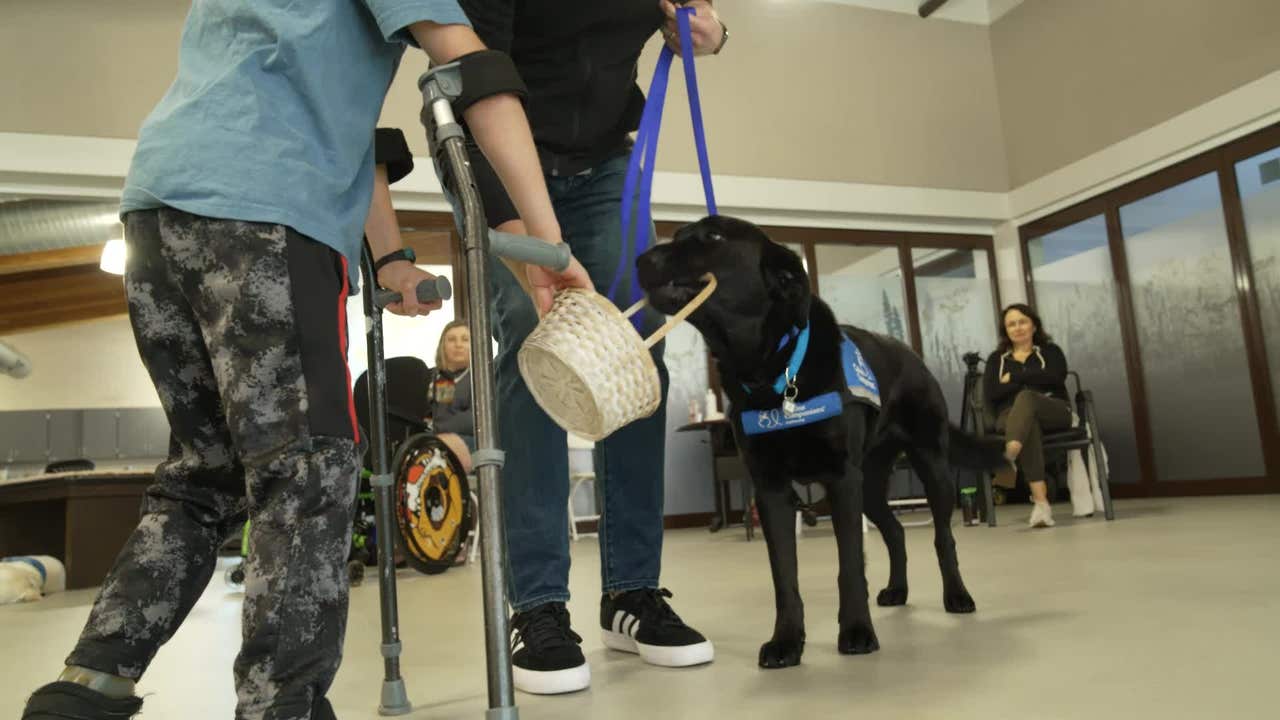 RICHARDSON, TX – It was a touching moment for the family of a third-grade Richardson boy with spina bifida.

He received his specially trained service dog from an Irving-based nonprofit that matches people across the country with dogs that can give them greater independence.

Two families are connected by a dog.

A family raised her.

“I said I wasn’t going to fall in love with her,” Kelly Torman said.

The other family received it.

“I feel like I can have fun with her,” said 9-year-old Solomon Paresky.

On Friday, the two families met for the first time.

The Tormans had Wickie when she was 8 weeks old and spent a year and a half teaching the Labrador-Golden Retriever mix how to be a service dog.

Their labor of love has now paid off.

Wickie is now a service dog for Solomon, who was born with spina bifida.

After the official leash swap, Stephanie shared her son’s story.

“He had 15 surgeries in his short life,” she said. “Most recently in April.”

When Solomon was born, the family had to learn a new way of life before he could even come home from NICU.

“We had to pass tests to prove that we could take care of our son,” Solomon’s mother recalls. “We had to bring home a ventilator.”

Today, thanks to the donors who make the breeding and training of these service dogs possible through the nonprofit Canine Companions, there is a shining moment in Solomon’s history.

“Now we can bring home a dog and not a machine,” Stephanie added.

READ MORE: Dallas Animal Services calls on the community to adopt and volunteer to save lives

Wickie knows how to pick up things to help Solomon around the house, can open doors and offer encouragement, to some degree.

And there’s something else she can do too.

“Caring for a dog gives him confidence that he can do things on his own,” Stephanie added.

Courtney Craig, spokesperson for Canine Companions, showed FOX 4 how it all begins.

“He’s one of our newest future service dogs,” she said, pointing to one of their dogs. “All the puppies in our program start like this.”

“Potty train, teach them to be a nice dog, enjoy socializing in public,” Craig explained. “Doing all this for a year and a half and then giving it back to us, because it’s ultimately for someone else.”

The Tormans said they were ready to start all over again.

“And this one, I’m not going to fall in love with,” Torman said.

Click here for more information on becoming a puppy raiser for canine companions, requesting a service dog or making a donation.

Fat Dogs 2022: Here are the 10 affectionate dog breeds that can easily get chubby – including the adorable Labrador 🐕