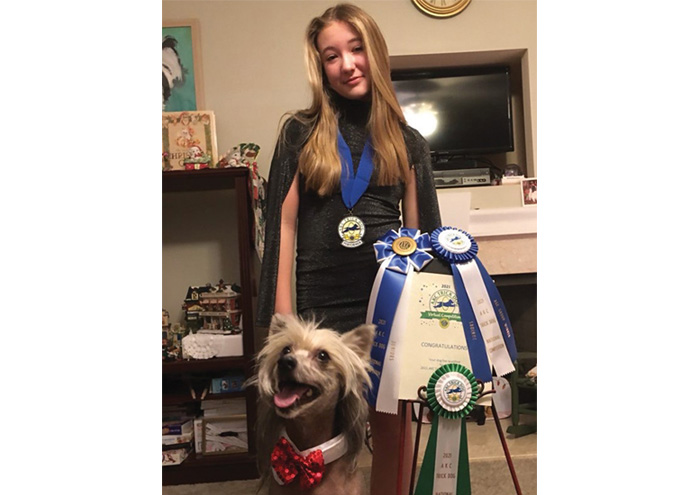 For the Crotts, dog training is family – Salisbury Post

SALISBURY — A simple trick started it all.

On one of the first days of her puppy’s obedience class, Tracy Crotts was given a homework assignment. She had to teach her dog to turn around. Tracy, a CPA, named her dog after the Financial Accounting Standards Board, better known as the FASB.

Fasb the dog learned quickly and mastered the trick with relative ease.

“This little guy showed me he was capable of so much more,” Tracy said.

Within a year, Tracy became a certified dog trainer. She taught Fasb, a small breed of spaniel called Papillon, dozens of tricks to become a certified trick dog instructor. Since then, Tracy has also trained the other four dogs in the family, a 13-year-old Smooth Collie named Nexus, a 6-year-old Chinese Crested named Sugar Bear, a 3-year-old Papillon named Cider and a 1-year-old Poodle named Echo.

Tracy, who lives with her family near Faith, passed on her propensity for training dogs to her 12-year-old daughter, Kara, who grew up among the family’s “pack” of dogs.

Kara’s time spent with the family dogs was recently recognized with ribbons, medals and a trophy.

In December, she was announced as the national winner of the 10-13 age group of the American Kennel Club’s 2021 Virtual Trick Dog Contest. Kara has been recognized for the tricks she pulled off with Sugar Bear, the dog she chose after seeing the breed on screen as Cruella de Vil’s personal dog in the 101 Dalmatians franchise. Sugar Bear won the national title for his breed in the competition.

“I think it really surprised her,” Tracy said.

Kara also received recognition for qualifying at the novice level for the trick routines she completed with Fasb, who turns 16 in April.

Kara and the family’s eldest dog haven’t always had such a strong bond. When Kara was a newborn, Tracy said Fasb wasn’t too fond of another Kara for stealing the show. But it didn’t take long for that to change.

“Fasb soon realized she was his best friend because she would throw food,” Tracy said.

Kara always played with the dogs and liked to crawl through their crates during games of hide and seek. When Tracy took the well-trained dogs to teach children’s ministry at her church, Kara was there to lend a hand.

Kara also competed with their dogs in local competitions and shows. At age 7, she won first place at the Junior 4-H dog show with Nexus. In 2016, Kara began competing in AKC competitions with Sugar Bear.

That’s why Tracy encouraged Kara to compete with Sugar Bear and Fasb in the AKC virtual pageant last year.

Tracy filmed videos of Kara going through trick routines with Sugar Bear and Fasb, some on homemade props. One of the videos was filmed at Understanding Your Dog, a dog training business run by Theresa Pitner in Salisbury town centre. Tracy and Pitner bonded over their shared love of dog training. During the Christmas season, Pitner hosted Tracy, Kara, and Sugar Bear as the trio delivered a holiday-themed performance. The Christmas show was only the most recent. Tracy and Sugar Bear also performed at Woofstock at Pitner Dog Park and hosted two Halloween shows.

Tracy’s is now turning its attention to spreading the gospel of good dog training. She is preparing to teach a dog safety and obedience course through Rowan County 4-H. The five-week course will take place every Tuesday from April 5 at Pitner Dog Park beyond the Salisbury Civic Center.

“Trick training is great mental stimulation for your dog and it helps develop his focus,” Tracy said. “It helps develop a partnership with you and your dog where you become a team.”

For her own dogs, Tracy wants to involve them in animal play. She even took a virtual course to find out what it takes to prepare dogs for the big screen.

Crotts is also proud of her work as a volunteer with Collie Rescue of the Carolinas and her past involvement in Therapy Dogs International with Nexus.

For more information or to register for the course, contact Rowan County 4-H Officer Laura Allen at 704-216-8970 or email [email protected]