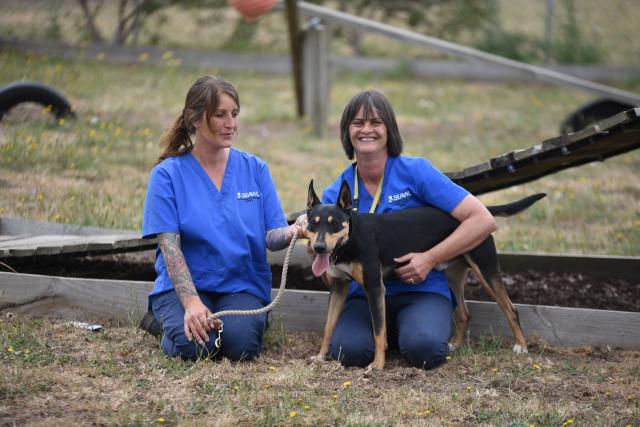 PET adoptions have been in higher demand during the Covid-19 pandemic, with waiting lists filled with cats and dogs who were adopted just days after being abandoned by previous owners.

“We’ve had heaps over the last two years, except for the last six months because of our waiting lists,” Ms Twilley said.

“If the people on the waiting lists are suitable owners, then the pets leave pretty much straight away, but before, over the years dogs and cats could stay here for months.”

The shelter limited itself to just one dog earlier this month – a bull terrier/kelpie cross named Ozzy – and he has since been adopted and other dogs have become available for adoption more recently.

Ms Perkovic said she received huge support from social media, a platform which they say has reached Adelaide and Geelong for people wanting to adopt.

Ms Twilley said research is essential for breeds when examining a cat or dog, even when they are already on league waiting lists.

The volunteers said there were many questions asked about returning to a normal working life and how it would affect a pet’s well-being.

“If you are not hired as an owner, please do not adopt a puppy, but when you adopt, be sure to microchip your pet, get ID on the collar or a phone number, it makes it much easier to return lost pets,” Ms. Perkovic said.

“Dogs only know what you teach them, so people have to be willing to train and at an early age is best.

“There are irresponsible pet owners who have failed to follow the pet stewardship regulation that all cats and dogs born from July 2018 must be desexed and microchipped,” Ms Twilley said.