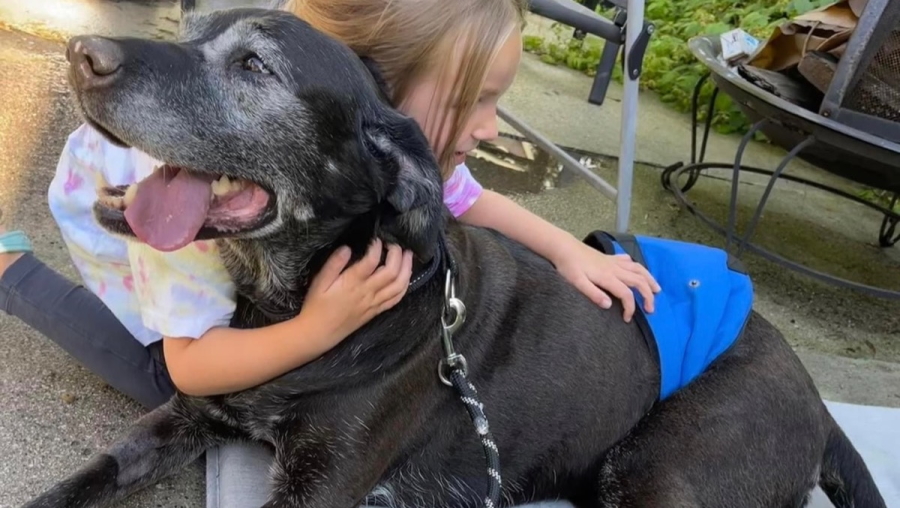 A Kenora dog emerges from the fight of his life thanks to the support of the community.

On July 21, Kenora resident Kelley Morrell, her dog Penny and her daughter’s dog Onyx were playing outside when Kelley noticed the two dogs were acting strangely, prompting Kelley to both rush to the veterinary clinic in Kenora.

Morrell says the vet confirmed to him that the two dogs had somehow ingested methamphetamine. Due to client and privacy laws, Kenora Veterinary Clinic was unable to independently confirm this information with KenoraOnline and Q104.

Morrell says they are working with the OPP to find out who might be responsible for the incident. KenoraOnline and Q104 have requested more information from the Ontario Provincial Police to confirm the status of their investigation and whether foul play may be involved.

Onyx, meanwhile, was taken to the intensive care unit at Bridgewater Animal Emergency Hospital in Winnipeg. That’s when a family friend set up a GoFundMe fundraiser for the Morrells, to help them with costs of up to $1,500 a night.

But on July 23, Onyx was able to join her family at her home in Kenora.

Onyx owner Brooke Morrell says Onyx has long-term neurological damage and can’t walk on her own yet, but her prognosis is good. She also took the time to thank Kenora and Winnipeg staff for their efforts to save Onyx’s life, as well as the support of the Kenora community.

“I can’t begin to thank everyone for the amount of love and support that has been given to us,” Brooke wrote. “It has been one of the most traumatic experiences a pet and its owner can have and we are beyond grateful to be able to bring our daughter home.”

As of this writing, the GoFundMe campaign has raised $6,250 of its $8,000 goal. They say any additional funds raised will be donated to It’s A Dog’s Life of Kenora. You can find a link to donate HERE.