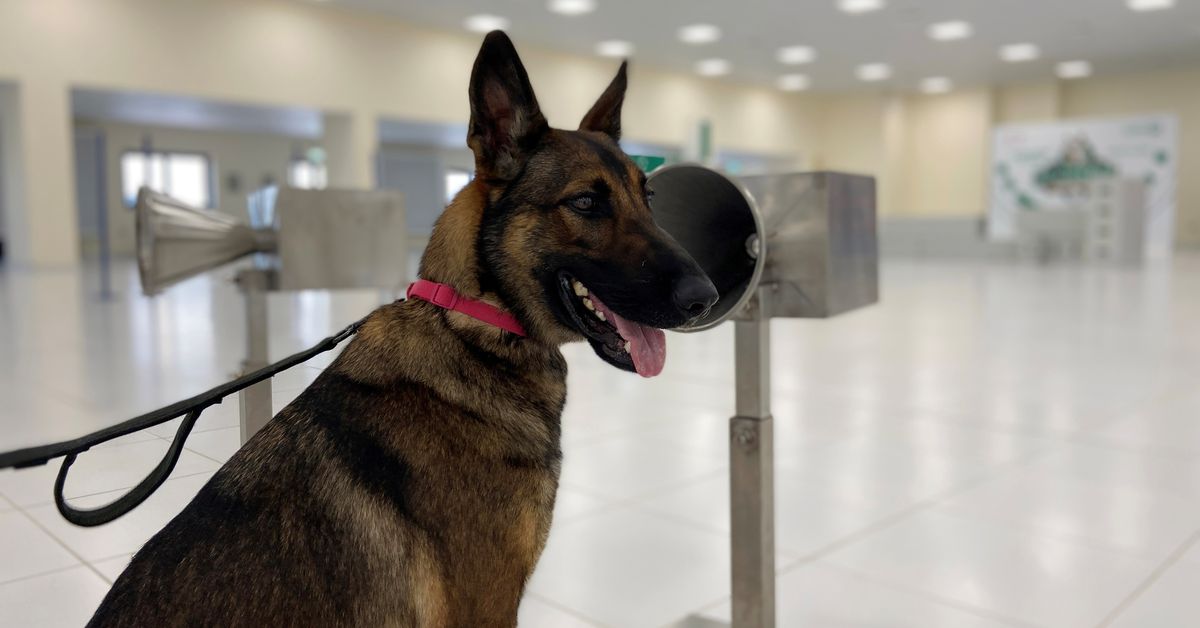 DUBAI, September 16 (Reuters) – A year after completing one of the first studies into canine detection of COVID-19, the United Arab Emirates now has 38 sniffer dogs working at their airports who can identify people infected with a 98.2% success rate.

Dubai Police have trained the cohort, which includes German Shepherds, Labradors, Cockers and Border Collies, to recognize the scent of COVID-19 using sweat samples from confirmed infected people collected in holding a cotton swab in an armpit for a few minutes.

“A very small amount is then put in a jar – it has the smell of the patient – then we take the sample out for the dog to sniff it … When he gives us a sign, we give him a treat,” he said. said First Lieutenant Nasser al-Falasi of the Dubai Police, program supervisor at the K9 training center in the Awir region of Dubai.

In the centre’s large training room, police officers walk dogs along a row of metal cans, only one of which contains a positive sample. The dogs sniff the samples and within seconds sit down to signal that they have found something.

Police trainer Fatima al-Jasmi, who is part of the COVID-19 detection team, guides an excited-looking black-and-white Border Collie through the exercises, succeeding every time.

“The training was a bit of a challenge, learning a new skill on an international level and then training the dog in that,” she said.

The study in Dubai, published in June in Communications Biology, part of the British scientific journal Nature, found a detection success rate of 98.2%.

The study used sweat samples and PCR tests from 3,290 people to compare the dogs’ detection abilities.

Several other countries, including Finland, the United States and France, have organized their own dog training and canine testing for COVID-19.

Falasi said dogs are currently performing around 30 to 40 tests per day at airports. Bolt, a black and tan Belgian Malinois, was the first COVID-19 detector dog he trained.

Dogs are primarily used at airports in the United Arab Emirates, but are ready for use wherever needed.

Dubai has received requests from around the world to share knowledge on how to train dogs to detect COVID-19, said Major Salah Khalifa al-Mazroui of the Dubai Police Force.

Dubai Police have also trained dogs to detect drugs and explosives, skills put to use as the Emirate of Dubai prepares to open the site of the Dubai Expo2020 World Expo next month.