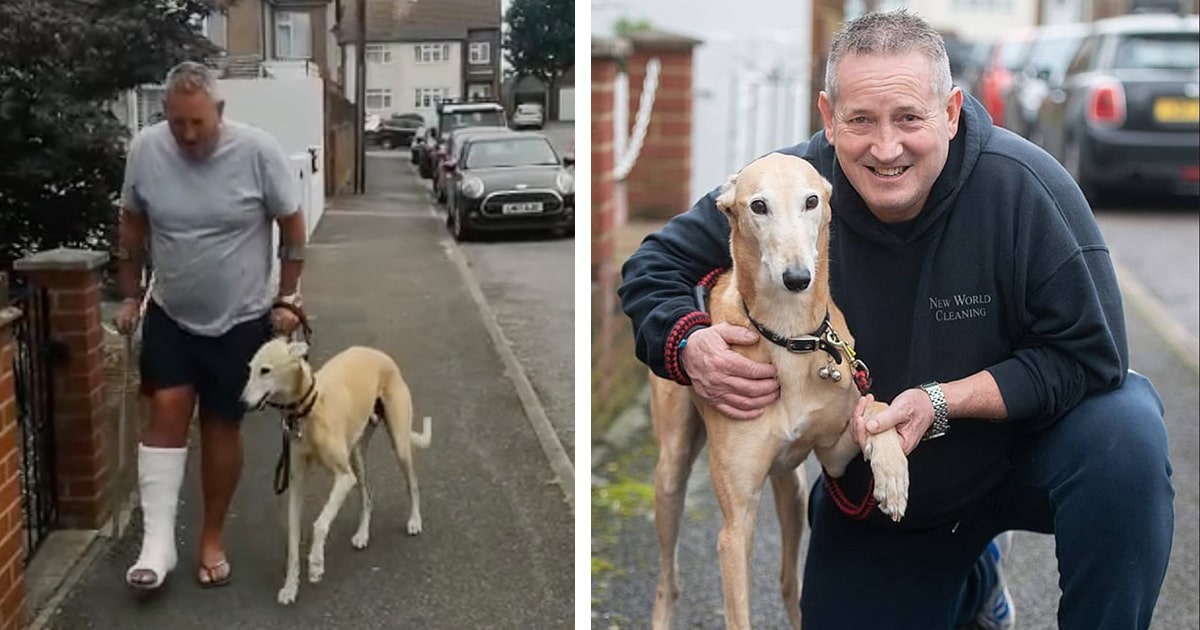 After a while, some pets and their owners may start to look alike. In the case of Russell Jones, pets and owners can also start acting the same way. When Jones had to use crutches after breaking his ankle, he noticed something was wrong with his Lurcher named Billy. During walks, the dog began to limp.

In a video Jones posted to the Lurcher Link Rescue cat Facebook group, he is seen wearing his cast and walking down a sidewalk testing out his crutches. Billy walks right beside his owner with his front paw lifted off the ground. The family rightfully assumed their beloved furry friend was injured and took him to the vet. They paid nearly $400 for two vet visits, paw and leg x-rays, and painkillers, hoping to get to the root of the problem. Unfortunately, the vets couldn’t figure out what was wrong with their beloved pet and told the family there was nothing they could do.

When the Joneses got home from the vet’s office, Billy went to play in the garden. Like magic, his limp disappeared and he started running around. As Jones put it in his Facebook post, there was “nothing wrong.” It seems that Billy is sympathetically copying his injured owner.

Quickly, the charming yet hilarious video went viral. Billy’s acting skills have garnered over 42,000 reactions and over 58,000 shares on Facebook and been broadcast on news stations around the world. Many viewers responded with funny stories about similar situations with their pets. One commenter detailed a time they suspected their pet Oscar’s tail was broken: ‘I wouldn’t let myself touch it, I wouldn’t sit on it [it], [it] clearly annoyed him. The commentator revealed that as they were paying for the vet visit, he “started wagging his tail looking at me. His love language is me emptying my wallet.

A month later, in February 2021, Jones posted another video with the cheeky caption, “What goes around comes around Bill.” In the video, the two walked together on the same sidewalk. This time though, because Billy had just had his dew claw removed, the pup had the cast on. While Billy was limping – for real this time – Jones appears to be a fake lame. Fans of the last video told Jones, “You also need a red bandage” and “Super fake hobble”.

Unfortunately, in March 2022, Jones shared in the Facebook group: “Hi everyone, I wanted to tell you here that my Billy ran on the [rainbow] today. He had lung cancer and it was time to say goodbye. I wanted to tell you about it here because that’s where our 5 minutes of fame began.

“Scientists have proven that dogs can have incredible empathy for their owners,” Jones’ wife Michelle said. “But Billy’s empathy was on another level, he was pretending to be in pain to make Russell feel loved. I think that’s so smart. Dogs are amazing.

Billy’s story was not over, however. Posthumously, on September 8, 2022, Billy received the Internet Sensation Award at the People’s Pet Awards. “For him to be honored so special is just amazing and keeps his memory alive,” Jones said. “We miss him dearly but are so touched that his story has been shared with millions of people around the world.”

In January 2021, Russell Jones noticed his Lurcher, Billy, was acting strangely since Jones broke his ankle. The dog had mysteriously started limping every time Jones walked him.

After returning home from spending nearly $400 at the vet to find out what was wrong with their furry friend, Billy’s lameness magically disappeared and he started running around their backyard.

The family quickly realized that Billy was copying Jones’ lameness and Jones posted the evidence online.

Billy’s acting skills have earned him fame on the internet, and the video has been adored by millions of people around the world.

A month later, Jones posted another video after Billy had to remove his dew claw. Billy now had a cast, and Jones was now limping out of sympathy.

Tragically, in March 2022, the beloved Lurcher passed away after a battle with lung cancer. The loss of the family was felt by fans around the world.

Billy’s story was not over, however. Posthumously, on September 8, 2022, Billy received the Internet Sensation Award at the People’s Pet Awards.

“For him to be honored so special is just amazing and keeps his memory alive,” Jones said. “We miss him dearly but are so touched that his story has been shared with millions of people around the world.”

25 adorable pet Halloween costumes for your favorite dog or cat