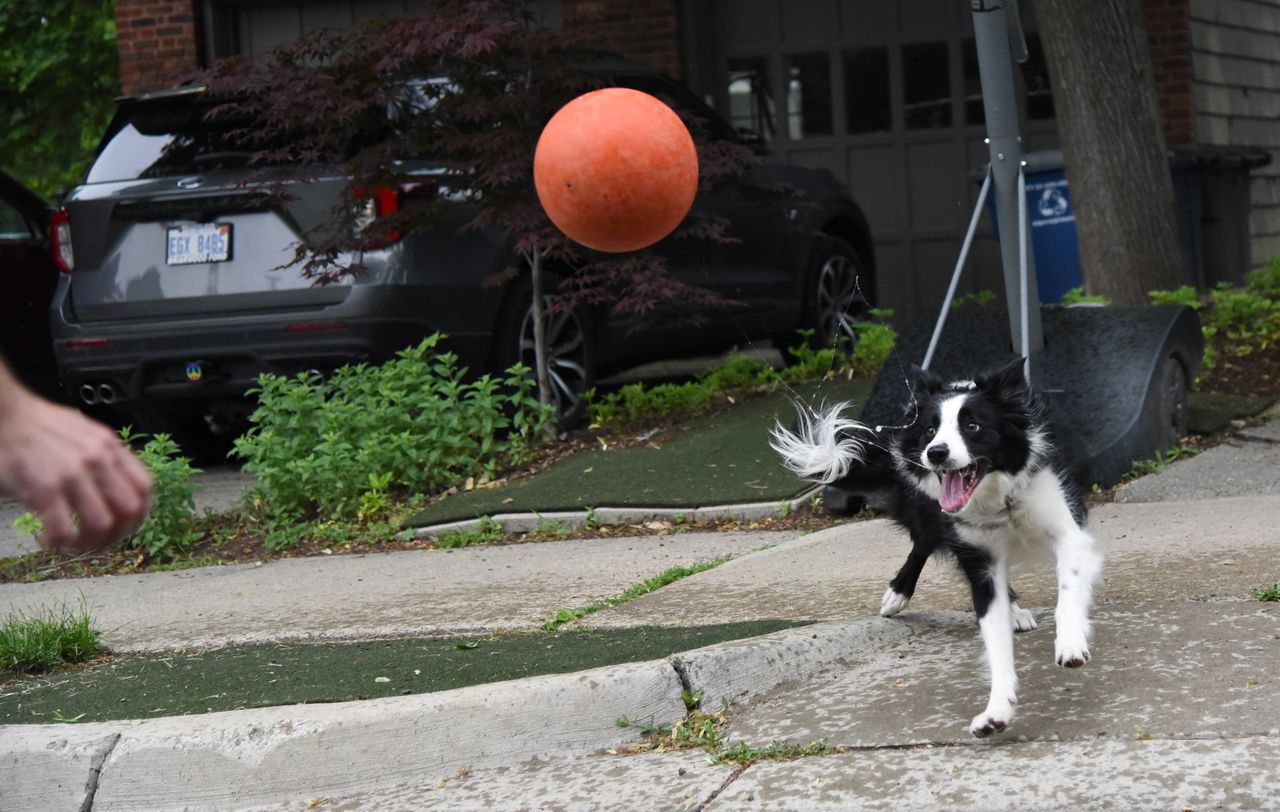 ANN ARBOR, MI — Scout Wallace is a cheerful, energetic dog with a special set of skills that has impressed millions.

The 5-year-old border collie who lives with Meg and Jim Wallace in the Burns Park neighborhood of Ann Arbor expertly bounces and passes basketballs to anyone who wants hoop practice outside the family home in Wells Street.

“He brings people a lot of joy,” Jim Wallace said.

A video of Scout in action, shot by a neighbor in the early months of the COVID-19 pandemic, went viral when it was shared on ESPN SportsCenter’s Facebook page in July 2020. Aptly titled “This Doggo is The Best Rebounder,” the video has racked up over 73 million views and is doing the rounds again.

A copy of it shared on Twitter this week racked up over 170,000 views in one day, continuing to amaze viewers.

In the viral video, Meg and Jim Wallace said Scout was bouncing back for their son Jack, who was 20 at the time. They have another son, Fred, and Scout is actually his dog.

“It’s gone crazy,” Meg Wallace said of the video, noting that it came at a time when many sporting events were shut down and people were home with their dogs, factors that, according to her, contributed to the virality of the video.

“All summer we were just watching the numbers go up and up, and all the crazy comments,” she said of the reaction to the original video. “We had a lot of fun with it.”

Two years later, Scout is still an internet sensation and continues to delight neighborhood passers-by, bringing smiles to those who stop to watch.

“It’s so cool,” Kate Waanders said on a recent walk.

Scout has always loved balls, but it wasn’t until the family had some landscaping done in April 2020 that the basketball hoop was moved from the backyard to along the street.

“So it was a lot easier to play basketball,” Jim Wallace said, adding that Scout had naturally picked up his rebounding skills like Dennis Rodman without any training.

Scout also does other tricks. On command, he can squeeze between Jim Wallace’s legs as he walks, do flying leaps to catch frisbees, flip and more.

“He also plays football and tennis and a lot of other things, but basketball is his most famous attribute,” Jim Wallace said. “Every day is a dog show in our house.”

Scout also teamed up with University of Michigan women’s basketball player Naz Hillmon for a special voting video ahead of the 2020 election, showing off her skills on the Burns Park court.

The family got Scout from a working sheep farm west of Chelsea and quickly realized he was a talented pup.

“As a breed, they need to be busy, physically or mentally,” Jim Wallace said. “He’s a really good dog. We spend a lot of time working together. It’s actually been great during the pandemic because we’ve been working from home and every break we can just go out and throw a ball or throw frisbee or take a walk or something.

They shoot hoops at least once a day, and Scout runs quickly and excitedly to her station under the hoop at the very whisper of the word basketball.

“A lot of people worry about having a nose ache, but he never complains about it,” Jim Wallace said, adding that the only time Scout had done too much and played too much was during a summer camp at Pioneer High School.

“We tried to keep it out,” Meg Wallace said. “He just yelled and yelled, because that’s really what he prefers to play.”

The Wallaces have no intention of trying to capitalize on Scout’s internet fame. They’re just happy that he makes people smile.

Solar panels are coming to 9 Ann Arbor parks, along with EV chargers