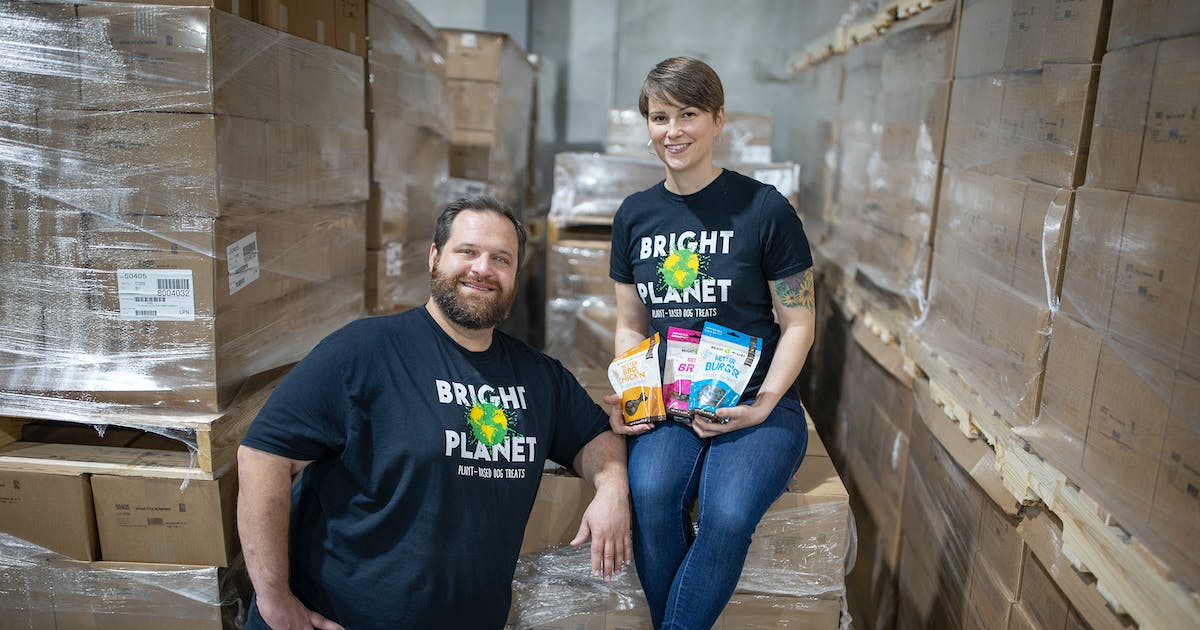 Katherine Ellison has worked in the pet food and animal welfare industry for 14 years, helping other brands launch products and pet owners care for their furry companions.

So when she was laid off from her sales and marketing job at a Twin Cities feed manufacturer last year, she decided to apply her knowledge to a new business.

In March, Ellison launched a brand of plant-based dog treats called Bright Planet Pet. The brand, which she operates from their Bloomington home with her husband, Dave, has already caught the attention of major retailers.

The U.S. pet food and treat market is growing rapidly, generating $ 42 billion in sales last year, according to the American Pet Products Association.

Pet Valu, a pet retailer in Canada, sells Bright Planet products in 400 stores and online, Ellison said. Starting in February, Petco will offer the treats to 500 stores as part of a seasonal campaign showcasing sustainably made products, she said.

The brand can be found locally at Wedge and Linden Hills Grocery Co-operatives, as well as at the Brand Builders Market in St. Paul’s Keg & Case.

Ellison developed the idea for the product years ago after being inspired by a conversation she had at a trade show. She wanted to create dog treats that would appeal to millennial dog owners with more demanding preferences for their pets.

His plan was to create a dog treat based on the Impossible Burger, a plant-based patty with the flavor and texture of meat developed by California-based Impossible Foods.

She created a basic formula for the treats and refined her recipe with a local food scientist. She then raised $ 10,000 through a crowdfunding campaign on Kickstarter and found a local pet food company, Tuffy’s Treat Co., based in Delano, to make and package her first 7,000 bags.

Those who supported the company on Kickstarter each received a bag, and Ellison also began selling direct to consumers on his company’s website, Amazon.com and Boxed.com.

“We were lucky to get the recipe right the first time,” she said.

Sales have grown steadily since launch, Ellison said. By the end of 2022, Ellison expects his business to generate $ 450,000 in revenue and have a location in 2,500 stores across North America.

Earlier this year, Bright Planet Pet reached the semifinals of the Minnesota Cup, a statewide startup competition run by the University of Minnesota. Although her company did not win the grand prize, it did receive the $ 10,000 Green and Sustainable Chemistry Award from the Minnesota Pollution Control Agency, which recognizes a company with the best “results based on green and sustainable chemistry.” “.

Bright Planet Pet’s products require 68% less water than meat treats, Ellison said, and a portion of his company’s sales support a reforestation project. The $ 10,000 prize will be used for the transition to recyclable packaging and shipping materials.

Ellison also plans to raise funds from private investors to scale the business. These funds will help launch new products, including a rotisserie-flavored crunchy cookie treat and plant-based wet and dry dog ​​food, as well as plant-based cat food research and development.

“Our goal is to create affordable and accessible treats so that we can introduce a plant-based diet for the everyday dog,” she said.