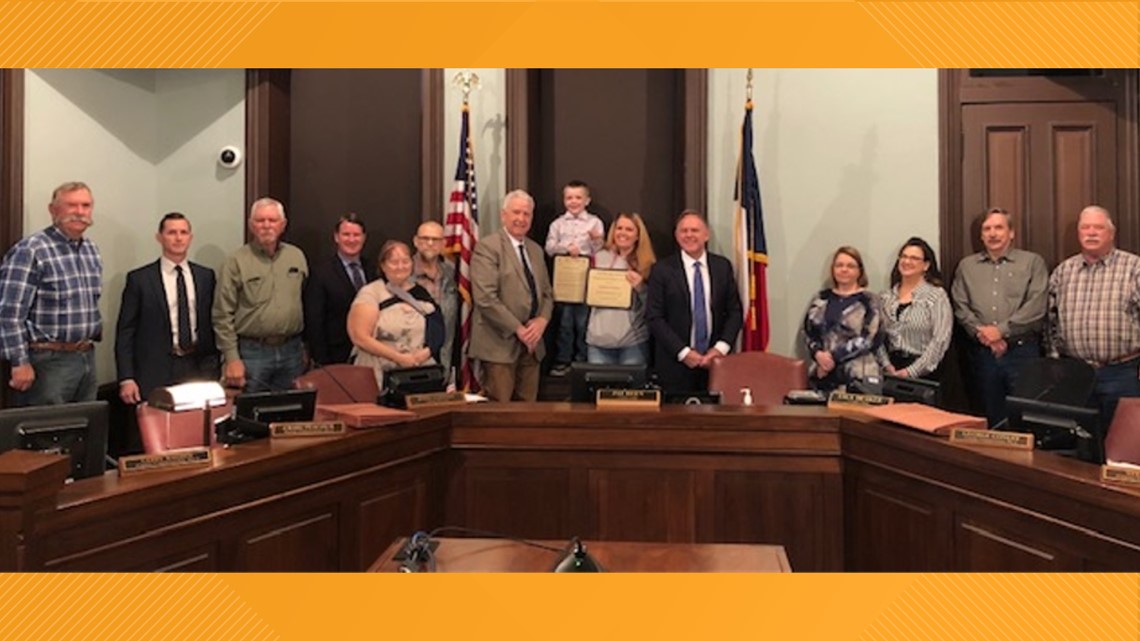 Lorena Parker received the Life Saving Award from Sheriff Russ Authier for her heroic actions in saving Connor Landers when he was brutally attacked by a dog.

PARKER COUNTY, Texas — Editor’s note: The above video was released on February 8, 2022, when Conner returned to school.

A woman who rescued a 7-year-old boy after he was attacked by a dog in her neighborhood was honored Monday by the Parker County Sheriff’s Office.

Lorena Parker received the Life Saving Award from Sheriff Russ Authier for her heroic actions in saving Connor Landers when he was brutally attacked by a dog on January 21, 2022.

That day, Landers was walking the short distance from the bus stop to his home when a dog, described as a box/bullmastiff cross, escaped from a fenced yard and mauled him.

Parker, who lives next door to Landers’ family, witnessed the incident. She told the WFAA during an interview in early February that she saw the dog standing over Landers “shaking him.”

Parker then grabbed a stick.

“I grabbed him and started hitting the dog. And then (the dog) drugs (Landers) all the way (on the street),” Parker told the WFAA.

Parker said she fought off the dog and managed to get Landers to safety.

For her bravery, she was initially awarded $500 through the fundraising efforts of Sheriff’s Office Animal Control Officers.

Landers was able to return to school after recovering for two weeks, he still has scars on his face.

On Monday, Feb. 28, Landers was there when her savior, Parker, received her award. He was all smiles!

The sheriff’s office said the dog’s owner, identified as 49-year-old Patti Jean Bell-Neveling, was arrested on a third-degree felony assault by a dog resulting in a grievous bodily harm warrant.