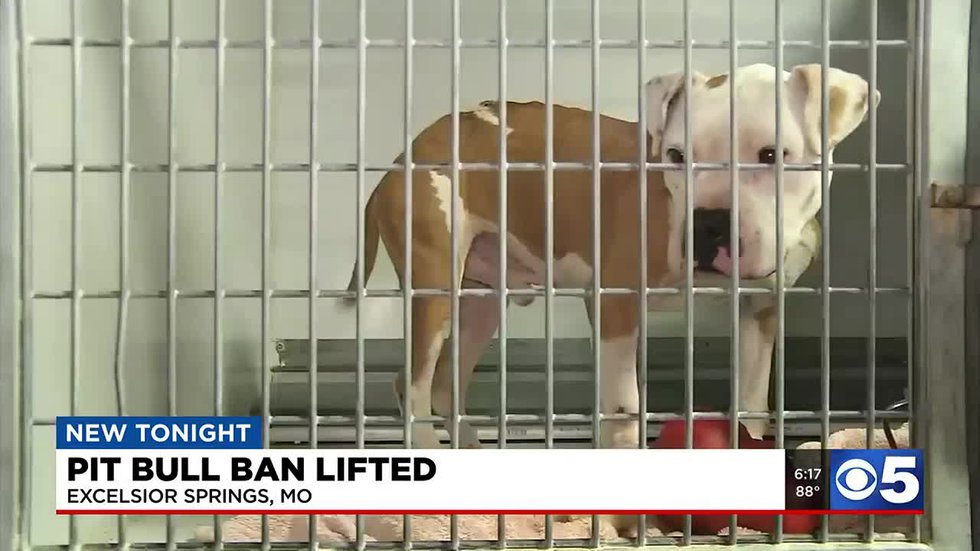 EXCELSIOR SPRINGS, Mo. (KCTV) – A 35-year ban on the Pitbull breed has been lifted in Excelsior Springs.

Kristee has a soft spot for the breed as she has a one-year-old pit bull at home named Swag.

“He likes the attention,” she said. “If you have your hands next to you and you don’t pet him, he grabs your hand in his mouth and forces you to pet him.”

That’s why, even though she doesn’t live in Excelsior Springs, she’s glad the city council voted unanimously to repeal a 35-year-old city policy or ban pit bulls.

Pit bulls, she says, are no more dangerous than any other breed.

“I can do 100 Pomeranians and have one bite me, like any breed,” Kristee said.

The city implemented the ban in 1987. During the 1980s, a number of pit bull attacks led communities across the country to institute bans.

Over the years, cities across the country and the metro have decided to repeal their bans. This includes KCK, Overland Park, Prairie Village, Shawnee, Liberty and others

“I think some of the owners have been vilified because they have this dog and they will feel bad,” said K-9 Clips Stay and Play owner Mike McCoy. “They’ll come in, scared to bring their dog, and it’s like, ‘No, your dog is not a problem.’ Their dogs were in and out in five minutes to get nails and they were like, “Wow, our dog was good,” and I was like, “Yeah, your dog’s not mean. You’re just being told that your dog is supposed to be naughty, but it really isn’t.

KCTV5 News ran the story of the city’s decision to repeal the ban this morning and opinions are split on it, including one person who said, “Not wise.”

Kristee said that despite what people think, it’s not the breed that’s dangerous. Instead, it’s the owners.

Animal control officials agree and said this change will help them enforce.