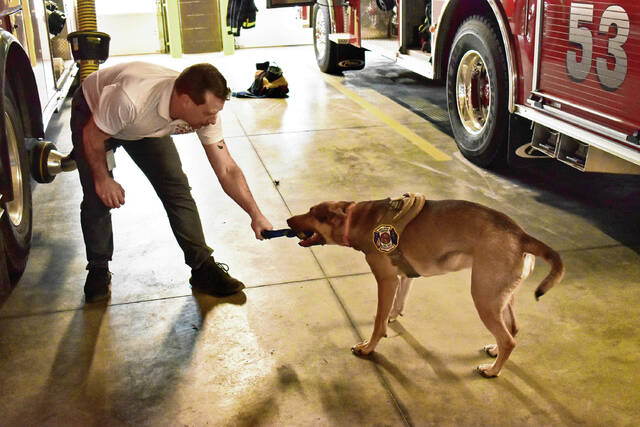 Rosie is curious, and one of these days it will come in handy.

The newest member of the White River Township Fire Department is certified in search and rescue and is so curious that she has earned the nickname “Nosy Rosie”.

She is constantly at the side of Fire Chief Jeremy Pell and has virtually unlimited access to the administrative offices of the White River Township Fire Department at Station 53 in northwest Johnson County.

Rosie’s story begins in September 2020, when she was found tied to a tree in White River Township with a note in a bottle attached to her collar. Her landlord had lost her job due to the coronavirus pandemic and was no longer able to give Rosie the home she deserved, the note read.

Pell got wind of Rosie and immediately wanted to adopt her. He contacted Johnson County Animal Control. One of his former dogs, also certified for research, had died. Another was aging, he said.

“As a side note, I was saying to a friend of mine… ‘If God really wants me to do this, I wish he would drop a dog in my backyard,'” Pell said. “This afternoon there was literally an abandoned dog in Johnson County 10 minutes from my house.”

Pell met Rosie and introduced her to his dogs and it seemed like a good fit. Now she’s Pell’s dog, as well as a certified rescue dog, which is especially important given the amount of searches local first responders have responded to in the past year.

Throughout 2021, Johnson County first responders were called in for 18 urban searches and six Project Lifesaver runs, most of which could have benefited from having a Search and Rescue K9 on the team. Project Lifesaver is a search and rescue program designed for “at risk” people who are prone to the life-threatening behavior of wandering outside their homes, according to the fire department.

“All the stars aligned and everything worked out for her to end up as a certified rescue dog in Johnson County,” Pell said.

Since he adopted Rosie, she has taken many training courses. The first few months got her used to Pell’s family and other pets, as well as some basic obedience training.

Then came search and rescue training. For the past year or so, Rosie has been undergoing scent-specific tracking training, in which a search dog smells an item belonging to a missing person and fetches it based on scent. She also underwent human remains search training, and in December completed a 54-hour Advanced Canine Search Course with the Rhode Island State Police, one of the top search training agencies. and rescue, he said.

Pell did all the training in his spare time, with help from the department at times. Additionally, Rosie is also certified by the International Police Work Dog Association to conduct human remains searches, he said.

Rosie is continuing her training today, particularly with some of the service’s volunteers.

Liam Price, a former trainee turned volunteer, helped teach Rosie new tasks and even participated in a training search for Rosie. During the search, Rosie looked for a missing person, represented by Price, he said.

During Rosie’s downtime, she walks around the train station and meets everyone. Sometimes Price plays tug of war with her. She can get a little rough, but it’s a good time, Price and Pell said.

“She loves to come (here) in the morning. His first trick is to see who’s there and endear himself. She especially loves lunchtime — that’s when she’ll leave me and she’ll go sit with whoever’s having lunch,” Pell said.

Rosie is one of the first – if not the first – search dog of her kind for the county. Police departments in the area have K9s, but they work in different, more specific areas than what Rosie does as a certified search and rescue dog, he said.

Rosie has not yet been sent to participate in a local search, but has been used by Indiana K9 Search and Recovery, a non-profit organization that provides missing person search and recovery services to law enforcement. and community members. It can also be used countywide in collaboration and as a statewide mutual aid partner with Pell, the department says.

Whenever the time comes, she will be ready. She exceeded her expectations in every way, Pell said.

“You always worry, when you rescue a dog, how it’s going to fit in,” he said. “She far exceeded my expectations and is a loving, friendly companion to others and dogs.”

Rosie was also used for educational programs at the Johnson County Sheriff’s Office.

Rosie also helps the department with some of her other teams. White River Township Fire has a structural collapse rescue and also supports the operations of the county’s top diving team water rescues, Pell said.

Later this year, the duo will also take part in an aquatic search and rescue course for certification, he said.

What makes Rosie special in Pell’s eyes is that she is who she is. She has a wonderful spirit, regardless of race, which is debatable. Rosie is thought to be a Shepard mix, but both Pell and Price say there’s a chance she’s a Belgian Malinois-German Shepherd mix.

“Humans have such a wonderful bond with dogs anyway, (and) Rosie, me and Liam have built on that bond of love that she has and taught her that finding other people is a game. fun,” Pell said.

Price has an interesting theory on how Rosie got to where she is today.

“Why did God create ‘Nosy Rosie’?” he said. “Because Nosy Rosie has something to offer this world, and that is to be a search and rescue dog.”