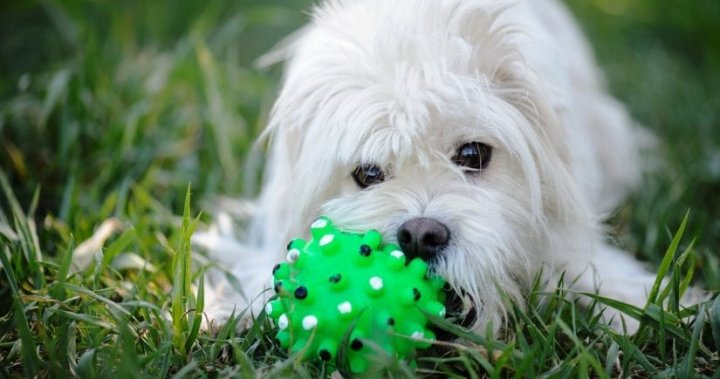 The BC SPCA is urging the College of Veterinarians of British Columbia to ban dog debarking surgery.

The operation, also known as canine devocalization, involves removing a dog’s vocal cords to muffle or eliminate barking. The BC SPCA has opposed the procedure since the 1990s.

Emaciated dog on the road to recovery after being rescued, BC SPCA says

Gordon said the procedure caused dogs significant stress without suppressing their urge to bark. They may regain their ability to bark over time, making surgery unnecessary, she added.

Complications from dog debarking surgery range from short-term bleeding and infection to long-term effects like chronic coughing and respiratory distress, according to the BC SPCA.

Alberta and Nova Scotia have banned the practice, along with several US states, the European Union, the United Kingdom, Australia and New Zealand.

A dog barks for help after a woman fell on the Edmonton River Valley embankment – April 15, 2022

The College of Veterinarians of British Columbia (CVBC) banned the ear cropping and tail docking of dogs in 2016, and the declawing of cats in 2018. In an emailed statement, Registrar and CEO Megan Bergman said the college “recognizes the importance” of considering changes to animal welfare standards and regulations, but did not respond directly to the BC SPCA’s petition.

In order to make a change, Bergman said the CVBC Council needs to look into the matter, scour available information and literature on the subject, and undertake consultation with registrants and stakeholders, including the SPCA and the Society of British Columbia Veterinarians.

“As this process is in the early stages of Board discussion, we are unable to comment, and we look forward to working collaboratively to review canine devocalisation,” she wrote.

The CVBC council will meet on April 29. It’s unclear if debarking surgery is on the cards.

Meet Fetch By The Dodo, A New Breed Of Pet Insurance