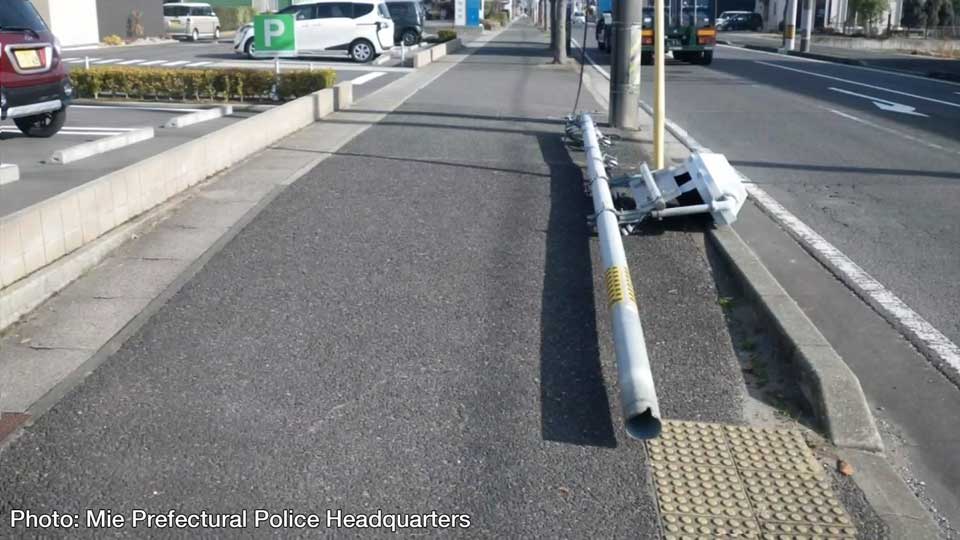 The dog pee caused the collapse of a traffic pole in Japan. Then things got weird

Authorities were initially baffled when an iron traffic light collapsed in Mie Prefecture in Kansai, Honshu. The six-meter (19-foot) pole fell on bushes without injuring anyone, but now the likely culprit has been found

This type of post is designed to last approximately 50 years. This one broke barely 23 years after its installation. In Japan, a country known for its stellar engineering, this doesn’t happen very often, so authorities wanted to see what the cause was. The post structure looked fine, so why did it break?

It was the chemical analyzes that revealed a criminal act; canine foul play, that is. The urea concentration in the post’s underground foundation was 42 times higher than in other traffic lights nearby. Around the edge of the column, the concentration was also 8 times higher.

Since urea is a waste found in urine, authorities began to suspect that it was dog urine that was causing the problem. A brief investigation found that many people were walking their dogs in the area, and when a new traffic light was put up it also became a popular urine spot for dogs.

Mammalian urine can corrode the metal, as it appears to have been the case here. While this doesn’t happen overnight, the damage can build up year after year.

“Even if the amount of urine is low, repetition over a long period can damage public infrastructure and cause it to collapse,” said officer Takahashi Koji, who serves in the traffic management and control division of the prefectural police.

After that, things got even more bizarre.

Koji called on dog owners to find other places for their pets to urinate, which seems pretty reasonable. A tree or a park or something, right? Well not really. “We want them to look for alternatives, like encouraging their pets to pee before going for a walk,” Koji said.

As NHK Reports, the dog owners in the area were very confused, but veterinarian Shibanai Akiko agrees and says it’s time for the dogs to start peeing at home.

“Dogs don’t stress even if they don’t excrete or pee during a walk, or if they don’t mark their territory,” she explains. “Plus, it won’t make them sick. “

“I recommend that owners discipline their dogs to excrete at home to check their health with their excretory substances. It is also to allow dogs to realize that they are members of our society, ”she says.

So, uh, is it time for dogs to start peeing at home, and not just walking around? What do you think?

Obese senior dog thrown down Michigan Highway is now happy, healthy and in a loving home