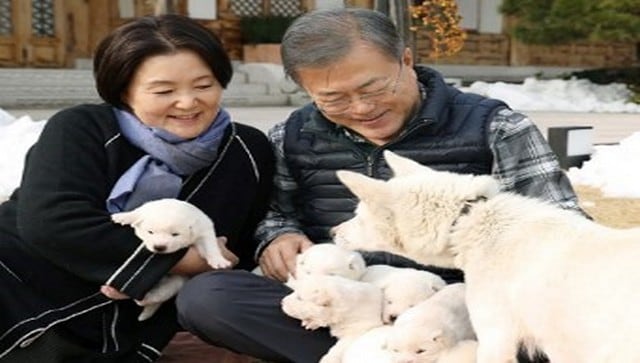 Former President Moon Jae-in reflects on the decision to give up a pair of dogs given to him by North Korean leader Kim Jong-un at a summit in 2018, saying current South Korean President Yoon Suk-Yeol showed little support. to raise the dogs further.

Since their arrival, Moon has taken care of a pair of white Pungsan dogs, named Gomi and Songgang. After his term ended in May, Moon took them to his personal residence.

Let’s take a closer look at why the dogs got stuck in the middle of a controversy.

Why were the dogs given to Moon?

In 2018, according to a report by ReutersMoon Jae-in and Kim Jong-un held a private meeting in the North Korean capital of Pyongyang, after which the latter announced his plan to present canines to the South Korean president.

The move was seen as a sign of growing cordial relations between the two countries.

The dogs – a male and a female – aged one at the time, were brought south via the heavily fortified demilitarized zone (DMZ) and the truce village of Panmunjom. But the dogs did not come alone, with them the North Korean authorities sent three kilograms of dog food to help the adaptation process, according to AFP.

The breed, Pungsan, named after a county in North Korea, is known for its loyalty and hunting skills. It is designated as the “natural monument animal” of North Korea.

It was decided at the time that the two dogs would share their space with South Korea’s first shelter dog who took up residence in the presidential compound named Tori.

During their stay in the presidential household, the dogs produced seven puppies, according to a report by New York Post.

What is the controversy?

Media reports suggest the dogs are legally classified as state property belonging to the presidential archives.

However, to the contrary, Moon’s office said custody of the dogs was given to him, even after he left his post, following consultations with the archives and the Interior Ministry and that it was a matter of of an unprecedented decision.

According to a report by BBC, there was an agreement with the Home Office which stated that supplies and expenses for caring for the dogs could be paid for from the state budget. However, that deal has now fallen through due to “unexplained opposition” from President Yoon Suk-yeol’s office.

During their stay in the presidential household, the dogs produced seven puppies. AFP

A newspaper called Chosun Ilbo quoted unnamed government officials as saying a debate had taken place in parliament over whether or not Moon should receive a monthly subsidy of 2.5 million won (Rs 1.47,000).

On Facebook, Moon’s office said, “The presidential office seems to be negative about handing over the management of the Pungsan dogs to former President Moon.

“If that’s the case, we can be cool about it, because such a mission is based on the goodwill of both parties … even if ending it is unfortunate given that these are pets that he got attached,” the statement added.

Additionally, according to a March 2022 report by Yonhap News AgencyCheong Wa Dae officials had suggested that the dogs could not live in Moon’s private residence after his retirement because they had been gifted to him as head of state and not as an individual.

Yoon’s office denied intervening in the matter, saying it was not involved in the deliberations and that discussions between affected parties are currently underway.

Back to canine diplomacy

It is not the first time that a North Korean leader has given dogs to his South Korean counterpart. In 2000, Kim Jong-un’s father, Kim Jong II, sent two Pungsan dogs to South Korean President Kim Dae-jung during their first inter-Korean summit.

In 2012, Russian President Vladimir Putin received a dog as a gift from the Japanese government. However, in 2016 the gift was refused by Putin for unspecified reasons. The dog was a female Akita named Yume.

In the same year, when Putin rejected the gift from Japan, he received an albai dog from the President of Turkmenistan, Gurbanguly Berdymukhammedov, who said when presenting the dog that it was a birthday present for Putin, according to a report by The Washington Post. The dog was later named “Verny”, which means faithful in Russian.

With contributions from agencies

Best Dogs In USA 2022: These are the 10 most popular affectionate dog breeds in the United States of America – including the adorable Labrador 🐶