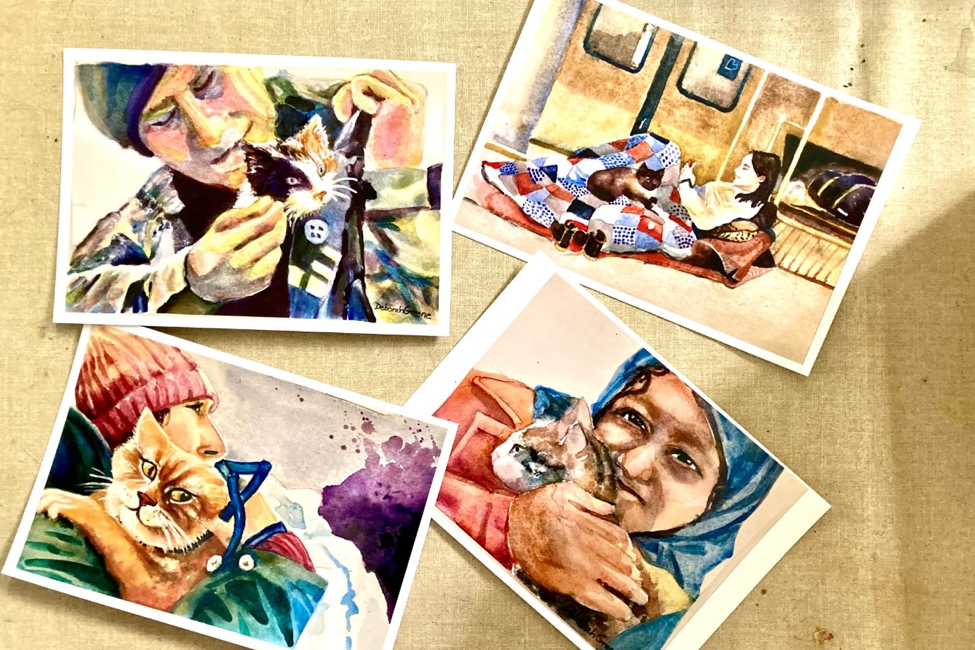 Greater Barrington— An art exhibit by local artist Deborah Hanson Greene, “Ukrainians and Their Pets,” will be on view at the Berkshire Food Co-Op through Wednesday, November 30. The exhibition consists of watercolors depicting Ukrainians who live in a war-torn country with their pets.

In an interview with The Berkshire Edge, Greene said she was inspired to create the paintings after hearing reports of Ukrainians having to flee war-torn parts of the country with their pets. “On YouTube, I’ve seen a few examples of people crossing bridges and roads with just one backpack and their pet, leaving everything else behind,” Greene said. “I also found dozens of stories about people leaving their pets in shelters, as well as stories about organizations trying to save them. It’s upsetting for me because I’m an animal lover and my pets are like my children. It touched me and I was losing sleep over it.

Greene said she watched videos of Ukrainians to create the paintings. “I was taking composites of my images and started drawing them as a way to heal and try to understand what I was seeing,” she said. “I was doing it for myself, but I showed my work to a few of my neighbors. They were moved by it. Even neighbors who had never owned pets seemed to be haunted by the pictures I painted.

Greene said she lined up the Berkshire Food Co-Op to show off the paintings several months ago. “Honestly, I thought the war would be over by now,” Greene said. “But it’s getting worse, and it’s still raging. I hope people shopping here will stop to look at the art and think a little about the animals that are either left behind or in refugee homes. I want residents to stop and think about the contrast between their own lives and those of Ukrainians, and how grateful we should all be for what we have right now.

Get the latest news and events straight to your inbox.

Fat Dogs 2022: Here are the 10 affectionate dog breeds that can easily get chubby – including the adorable Labrador 🐕

In Google Voice scams, crooks seek to steal your identity to commit crimes